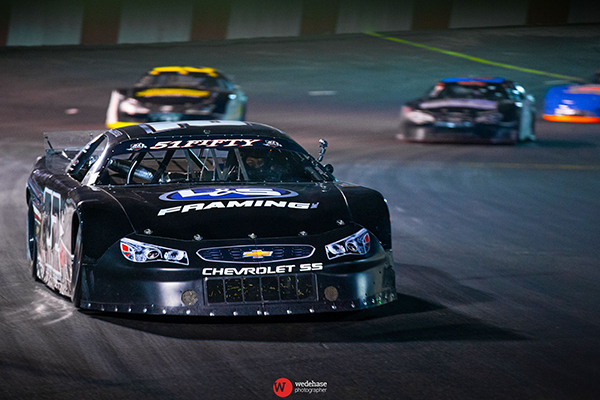 MADERA, CALIF. (November 14, 2020) – 14-year-old Bradley Erickson won his sixth triumph of the 2020 season at Madera Speedway, but first in a Pro Late Model, topping an outstanding field for the $2,000 75-lap Turkey Triple Open win. Erickson was one of four winners during the late-season non-points finale, which was followed by an on-track presentation of the Championship Awards Banquet. Photo by Jason Wedehase

Phoenix’s Erickson won the 2020 51FIFTY Jr. Late Model Series on the strength of five victories in 2020.

30 Open Pro Late Models were in attendance, narrowed to 26 starters by a 30-lap B-Main. An eight-car inversion placed 2018 Madera Late Model champion Jason Aguirre on the pole position. Aguirre paced the first 18 caution-free laps. On the ensuing restart, Colby Potts dropped to fifth position on the outside line. Erickson knifed up to the second position by that point.

Fast-time qualifier Jason Romero worked from the eighth starting position to third by lap 25, then grabbed second from Erickson on lap 35. Seth Wise spun with contact from Tim Skoglund for a caution on lap 37. Bakersfield’s Buddy Shepherd fell out of the race under that caution as well.

Aguirre gave Romero the outside on the restart, with Romero taking over the lead on lap 38. Eric Nascimento, Jr. followed on the outside to take second as well, before Aguirre held off Austin Herzog for third. The next caution fell on lap 47 when Matt Wendt and Thomas Martin tangled in turn four. Justin Westmoreland slammed the turn three wall requiring a red flag on lap 48. Romero chose the inside of Nascimento on the restart. Nascimento edged ahead on the outside, taking the lead by lap 50 when the caution fell yet again.

Romero tangled with Aguirre in a scramble for the second position when the race resumed, knocking Romero back to the 14th position. A multi-car skirmish on lap 56 saw both Austin and Bryan Herzog sideways, resulting in Richard Herzog spinning and collecting Calvin Hegje.

Eric Nascimento, Jr. picked the inside on the next green flag and held the lead. Aguirre spun from the second position with a right rear flat tire in turn four on lap 59. Nascimento again picked the bottom, this time against Bradley Erickson. Erickson showed veteran skill as he swooped around the outside to lead lap 60.

Erickson drove away from the pack while Seth Wise made it past Nascimento for second. The all-51FIFTY Jr. Late Model graduate podium saw Erickson, Wise, and Nascimento on top. They were followed by Potts and a resurgent Romero rounding out the top-five.

The Challenge Cup Series ran its final race of 2020 with another 51FIFTY graduate – Las Vegas’ Kyle Keller – topping the field in the 75-lap contest. The race had several lead changes as Jesse James Burks led the first ten laps before sixth starting Thomas Martin took over on lap 11.

Vince Little went third to first to lead lap 26. Both Martin and Little encountered issues, allowing Burkes to re-take the top spot on lap 31. Keller challenged Burks until grabbing the point on lap 51. A lap 62 caution for debris did not deter Kyle Keller as he led Martin, Burks, Rich Innis of Sun Valley, NV, and Thomas Suarez as the top-five finishers.

A season-best 13 Hobby Stocks raced for $700 to win in a 75-lap affair with Howard Holden overcoming an eight-car invert to win. Holden spun on lap three, but masterfully drove through the field to take the top position by lap 18. Tyler Rogers went to the back for his involvement in the incident but advanced steadily through the field throughout the race. Holden led Brandon Jones, Rogers, Las Vegas’ Kyle Jacks, and Nick Rowe as the top-five finishers.

Jason Philpot won his 14th Modified feature of the year as the 2020 Ukiah Speedway and All American Speedway champion won the 75-lap, $1000 to win event at Madera. Doug Hamm led 63 laps of the race before a caution fell on lap 64 for Sam Jacks stopping on the apron to the front stretch. Eddie Secord took over the lead on the restart. Kayli Barker had a mechanical failure while both Hamm and Second spun on opposite ends of the track for a tumultuous lap 68. Barker was unable to continue while both Hamm and Secord were relegated to the tail of the lead lap for spinning.

Philpot assumed the lead on lap 69 while Second, Hamm, and Jaron Giannini spun into turn three in a three-wide battle for third. Hamm suffered heavy damage in the melee that ended his race. Philpot led Second, Giannini, Aaron Coonfield, and Tom Pfundstein across the finish line in the exciting finish.