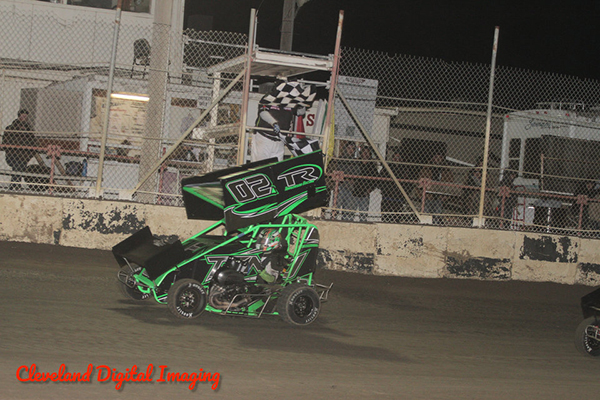 Medford, Ore. (November 9, 2020) – 14-year-old Ashton Torgerson of Medford, Oregon continued his outstanding season in Ten-J Chassis Micro Sprints, charging to the $1,200 victory in the eighth Lonnie Kaiser Memorial at Dixon Speedway on Saturday night. The Super 600 victory is Torgerson’s ninth of the year and the 16th win for Torgerson Racing in 2020. Photo by Chris Cleveland

Ashton narrowly missed out on sweeping the Super 600 weekend, falling short of Brad Hannum by just .062 seconds in Friday’s opening night. Friday’s races were held in tribute to Todd Damron. Ashton timed in third quick while his 17-year-old brother Austin was fifth.

A second-place finish in both the dash and the heat race lined Ashton up on the outside front row for the feature before the narrow finish at the checkered flag. Austin lined up sixth and finished fourth.

In other action on Friday night, Austin Torgerson drove from 17th to finish fifth in the Non-Wing feature. His Stock effort on Friday was a big one, taking fast-time during a rare appearance of the Stock division at Dixon Speedway. He went on to finish second in the feature. Ashton added a fourth place in Friday’s Non-Wing feature as well.

Saturday was officially the Lonnie Kaiser Memorial with over 100 Micro Sprints in action. In Super 600, Ashton Torgerson qualified fifth. In the 40-lap championship feature, Torgerson worked his way up to the third position early in the contest.

Race leader Brad Hannum fell out with mechanical trouble, thrusting the battle between Torgerson and Rickey Sanders for the top spot. Torgerson took over the lead on lap 20 with his best lap of the main event. He held off 2020 Delta champion Caden Sarale for his ninth win of the year.

Ashton Torgerson then turned his attention to Non-Wing competition where a dash win gave him a shot to win the feature from the pole. He led the first 33-laps of the main event before a problem with the injection relegated him to a DNF. Austin Torgerson did not get a chance to challenge on Saturday night as contact in the Non-Wing dash led to a sore back. Ashton took over controls of the #88 Adams Performance Stock 600, finishing third after starting shotgun in the 11-car field.

Torgerson Racing continues their busy 2020 season with a return to Adobe Mountain Speedway in Glendale, Ariz. this Saturday night.
To learn more about Torgerson Racing, visit them at their new website www.TorgersonRacing.com Torgerson Racing is also available on Facebook, Twitter, and Instagram.