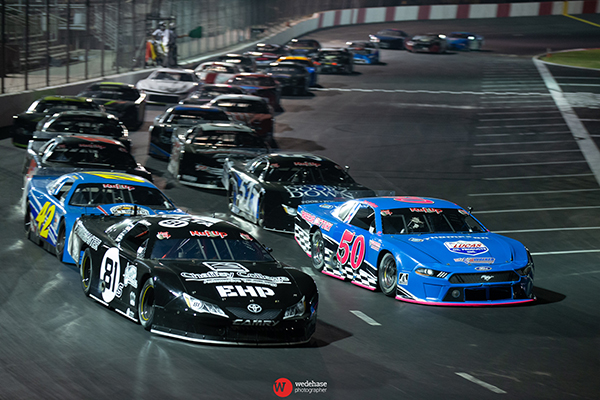 MADERA, CALIF. (September 15, 2020) – The competitors in the Nut Up Pro Late Models and 51FIFTY Jr. Late Models will hope seven is a lucky number, as drivers jockey for coveted victories in round #7 of the MAVTV-televised divisions on Saturday night at Madera Speedway. An unpredictable round #6 for the Pro Late Models has changed the championship complexion, while the Jr. Late Models continue to follow Bradley Erickson. The Mini Cups vs. Bandoleros are also on tap for this competitor-only event. Photo by Jason Wedehase

Grandstands remain closed due to COVID-19 industry guidance, but Madera Speedway, Mission Foods, and Nut Up Industries will provide a free live stream. Race fans can tune in to Short Track TV on YouTube at 6pm Pacific for the coverage at https://youtu.be/LskNr29ySxo

Livermore’s Ryan Philpott, the 2007 Altamont Raceway Park champion and a winner in the Nut Up Pro Late Models in 2016, returned to victory lane after an adventurous final restart in round #6 of the series. Philpott emerged victorious after restarting fifth and avoiding the incident that unfolded in front of him. Philpott will look for a second consecutive win this Saturday with the MAVTV cameras and lights shining brightly on the veteran driver.

Buddy Shepherd of Bakersfield enters the 80-lap contest with a 48-point advantage in the championship over Philpott. He leads the series with 249 laps led and three victories. Ross Strmiska suffered a DNF in the last race which has placed him 62 points out of the lead. Blaine Rocha and Napa’s Dylan Zampa round out the top-five in the standings. Shelden Cooper leads a close battle for sixth ahead of 2019 Jr. Late Model champion Joey Iest and 2019 Nut Up Pro Late Model champion Austin Herzog. Glen Cook rounds out the top-ten.

The late September showing for the Pro LM has routinely been a deciding factor in the championship picture. In 2019, Zampa was out of the race by lap six to surrender nearly 30 points to eventual champion Herzog. Herzog saw his championship hopes fizzle in 2018 when he finished 15th in a late race scuffle, while eventual 2018 champion Matt Erickson won the race.

Phoenix’s Bradley Erickson has enjoyed a strong season in the 51FIFTY Jr. Late Models. Erickson won his third event of the season in round six, joined by his fourth fast-time of the year. The fast-time was also a new track record, zipping around the one-third mile in 14.982 seconds. Erickson leads the series for drivers ages 10-16 years-old by 57 markers over round five winner Cole Brown of Ukiah. Jake Bollman of Huntington Beach, Kercie Jung of Bakersfield, and Brody Armtrout of Smartsville round out the top-five. Kabe McClenny leads Colorado’s Cassidy Hinds in the battle for sixth in the standings.

Erickson will look to add to his 213 laps led, just shy of the 302 laps that 2019 champion Iest led last year. The 70-lap feature starts with a 40-lap opening segment followed by a 30-lap sprint to the finish.

Jeffrey Erickson continues to be the class of the Bandolero competition, winning all six races this year. Bandolero rookies Caden Cordova and Joey Kennealy are just 18 points apart in their battle for second. Rebecca Dubie of Tracy has a nine-point advantage over Harley Kennealy in the Mini Cup division, winning five of the six races so far. The combined race-within-a-race sees the youngest drivers at Madera Speedway battle for 30-laps.

Activities get underway on Friday with practice. Pit gates open at 2:00pm with the track open from 4:00pm to 7:00pm

On Saturday, pit gates open at 11:30am with practice beginning at 1:30pm. Qualifying will be at 3:00pm with the Mini Cup and Bandolero heat races to follow. Opening ceremonies and live streaming coverage will begin at approx. 4:50pm.