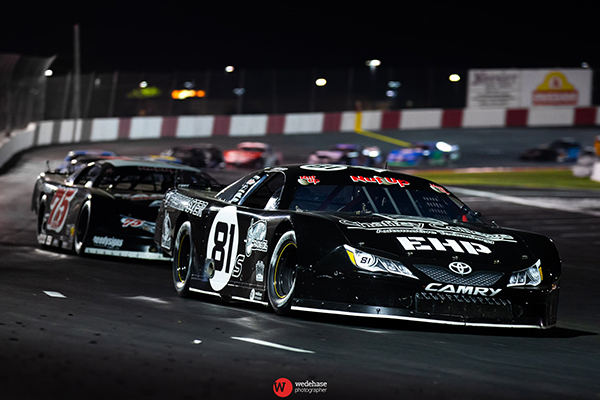 MADERA, CALIF. (September 6, 2020) – One of the most unpredictable nights of Nut Up Pro Late Model racing yielded a familiar result, as Bakersfield’s Buddy Shepherd emerged victorious with a $5,000 Race 2B Drug Free Big3 win to extend his points lead. Shepherd crossed the line first on lap 81, then was in the center of a restart melee that ended the feature prematurely due to curfew.

Shepherd squared off with 2019 NASCAR California State Champion Trevor Huddleston on the lap 81 restart. Huddleston ran side-by-side with Shepherd into turn one before moving in front of him on the exit of turn two. The pair made contact sending Huddleston into a spin. Carlos Vieira moved to avoid and collected Jeremy Doss, who rode the backstretch wall. The red flag flew as curfew expired, with Doss wedged up against the wall. Officials ruled that the restart was expected to be called back, reverting to the previous green flag lap to determine the finishing order. Shepherd was declared the winner ahead of Huddleston, Vieira, Doss, and Ryan Philpott.

Philpott led the opening lap from the pole while Huddleston and Shepherd battled for second. After a lap nine caution, Philpott picked the inside line. Shepherd swept around the outside to nab the lead. A lap 17 caution saw Huddleston drift back to sixth while ninth starting Dylan Zampa drove up to fourth. Doss ran down Shepherd and peeked inside on several occasions. A multi-car skirmish in turn four brought out a red flag. The field emerged from the red flag with a series of additional cautions, including an incident on a restart which thwarted Blaine Rocha’s drive from 12th to fifth.

Vieira went around the outside of Doss for second and tried to challenge Shepherd from the inside. A lap 43 restart saw Vieira fall back to fifth. Shepherd led Huddleston, Doss, Matt Erickson, and Vieira into the Mission Racing Style Tortilla Chips halfway show.

After a few cautions coming out of the break, both Vieira and Doss moved past Huddleston to challenge Shepherd. The trio ran tightly wound for much of the second half. Erickson and Dylan Zampa had a coming together that ended Erickson’s run towards a possible top-five finish on lap 72. Rocha spun from just outside the top-ten on the restart, ending another charge through the field.

Huddleston used the outside to retake the second position, setting up the final sequence of events. A significant incident ended the race for Colby Potts, Mike Beeler, and others on the backstretch. The ensuing restart was the exclamation point. Doss and Vieira were uninjured in the incident. Shepherd was ruled the victor over Huddleston, Vieira, Doss, and Philpott when reverting to lap 81.

Bradley Erickson of Phoenix, Ariz. won his third 51FIFTY Jr. Late Model Series race of 2020, taking the 70-lap contest from the sixth starting position after setting a new track record in time trials. Round five winner Cole Brown led the opening lap before an incident on lap 14 with Bollman and pole sitter Cody Kiemele making contact in turn three. The restart saw Erickson on the outside of Brown, with the 14-year-old Erickson using his preferred line to lead lap 15.

A caution on lap 19 impacted Brown’s race considerably. He slowed coming to the green and collected Kercie Jung. Both drivers had to pit for repairs and restart at the back. Erickson led Kabe McClenny, Cassidy Hinds, Kasey Kleyn, and Kale McClenny as the top-five into the lap 40 break. Kleyn and Hinds staged a spirited battle after the break for adjustments, before Kleyn got sideways on the frontstretch. Hinds spun and tagged the infield k-rail but was able to continue.

Kleyn then tangled with Jung in turn three for a caution on lap 51. Kale McClenny advanced to fourth before an issue on lap 57 relegated him to the infield and out of the race. Erickson topped a resurgent Bollman by 2.528 seconds at the finish with Kabe McClenny holding off Brown for third. Brody Armtrout finished fifth.

Jeffrey Erickson continued to bat 1.000, taking his sixth win of 2020 in the Bandoleros on Saturday night. Erickson led all 27-laps of the Bandolero competition while Harley Kennealy and Rebecca Dubie went back-and-forth in the Mini Cup portion of the event.

Kennealy spun early in a multi-car crash, then came back to take the Mini Cup lead on lap 18. Nathaniel Edwards was involved in separate incidents with Caden Cordova and debutant Cam Carroway. Carroway’s incident ended the event early on lap-27, with Erickson leading Cordova and Joey Kennealy in the Bandos. Dubie retook the lead in the Mini Cups to top Harley Kennealy and Evan Laires.