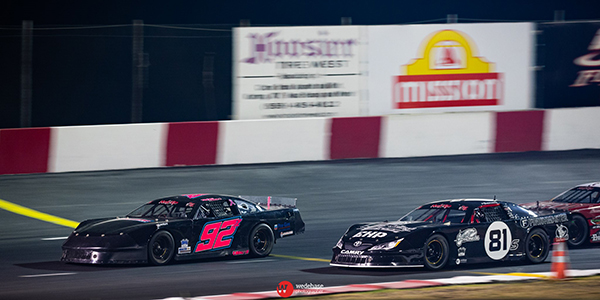 Zampa ran well on the exit on turn four throughout the event including the run to the finish line, topping Shepherd by a nose across the stripe.

“I just got to thank Buddy for racing me clean for the entire race. I knew his car was really good. We’ve been throwing anything at these cars,” Zampa said. “We’re going to come back to the next race and we’ll be faster. After the last couple of races we’ve been down and the cars haven’t been performing as they should be. We came into this race with a new setup and it worked. This crew has been working so hard and to get them a win means everything.”

Zampa went around the outside of Blaine Rocha to lead lap one. Ross Strmiska and Shepherd also passed Rocha around the outside, dropping the former MAVTV race winner to fourth. 2007 Altamont champion Ryan Philpott and 2019 51FIFTY Jr. Late Model champion Joey Iest also went past Rocha.

Shepherd began to challenge Strmiska for second, looking inside of him on lap 26. He used the lapped car of Jay Juleson as a pick to the grab the spot. Rocha turned his night around and advanced into fourth past Iest, also using Juleson to assist with the pass.

The first of many challenges between Shepherd and Zampa began on lap 32. Shepherd tried several crossover moves to get momentum on the bottom line, but couldn’t clear Zampa. Zampa led Shepherd, Strmiska, Rocha, and Iest into the lap 50 Mission Racing Style Tortilla Chips halfway break.

Emerging from the break for adjustments, Zampa used a power move to charge ahead of Shepherd on the restart. The top four lined up nose-to-tail for numerous laps while the battle for sixth saw six cars dueling in rows of two as well.

Rick Thompson spun on the backstretch for a caution on lap 69 with Zampa narrowly avoiding the spinning car. Zampa picked the outside of Shepherd and made some outstanding drives off turn four to keep the top spot. Shepherd dove inside of Zampa again on lap 72 down the backstretch, but Zampa powered away.

Coming to the checkered flag, Shepherd went inside Zampa for attempt to steal the victory. Zampa proved to have the momentum he needed as picked up his first Nut Up Pro Late Model win since the $5,000 to win event season opener in March of 2019. Shepherd, Strmiska, and Rocha rounded out the top-four. Shelden Cooper emerged from the mid-pack battle to earn a televised career-best fifth as well.

Ukiah’s Cole Brown broke the stranglehold of Bradley Erickson on the 51FIFTY Jr. Late Model Series with his first career Madera victory. Brown became the first Junior to run a 14 second lap in time trials before winning the feature.

The 70-lap contest for drivers ages 10-16 saw Jake Bollman leading from the pole position while fourth starting Kabe McClenny from Bakersfield drifted to seventh. Erickson drew the sixth position after the redraw, but methodically worked his way forward. Erickson was up to third past Kercie Jung of Bakersfield on lap 24. Brown worked his way towards Bollman, sliding underneath him with some contact into turn one. The move stuck with Brown leading lap 27.

A lap 29 caution for Hailey Liles losing an engine allowed Erickson to knife underneath Bollman for second on the restart. Brown led Erickson, Jung, Bollman, and Kabe McClenny into the lap 40 break for MAVTV interviews and adjustments. Colorado’s Cassidy Hinds failed to make it to the break with mechanical issues on the 40th lap.

Brown never faced much opposition over a fast-paced final 30 laps while the most exciting action involved 2019 All American Speedway champion Brody Armtrout and Bollman for the fourth position. Brown won by 3.251 seconds over Erickson, Jung, Brown, and Bollman.

Carson City, NV’s Nick Halen won his second consecutive INEX Legends of the Pacific feature at Madera Speedway, leading all 30-laps for the feature. The event was shortened by five laps due to numerous cautions and incidents.

A significant incident stopped the action when Michael Stearns tried to charge forward on the outside. Stearns went up to fourth before spinning into the front stretch wall, collecting Mike Soiseth and Justin Lovelace. Ethan Nascimento became a factor late in the race when he advanced to second past Bakersfield’s Eddie Garone on lap 28.

Garone and Nascimento made contact coming to the finish, with Garone launching over the top of Nascimento into a violent flip. The flipping ended on the finish line with Garone upside down and the car engulfed in flames. He was able to exit the car under his own power with assistance from the safety crew. Halen, ninth starting Kevin Travels of Turlock, Garone, Nascimento, and Rob Lathrop were the top-five finishers.

The youngest drivers at Madera Speedway compete in the Mini Cups vs. Bandoleros. Jeffrey Erickson persevered over a fair share of caution flags with the Phoenix-based 11-year-old grabbing his fifth consecutive win. Bakersfield rookie Caden Cordova led the opening six laps of the feature and ultimately finished second after a series of late cautions bunched up the field. Harley Kennealy passed Rebecca Dubie on the final restart to win her second career Mini Cup checkered flag in their portion of the race. Dubie remains the points leader in the division, however, after the second place effort.