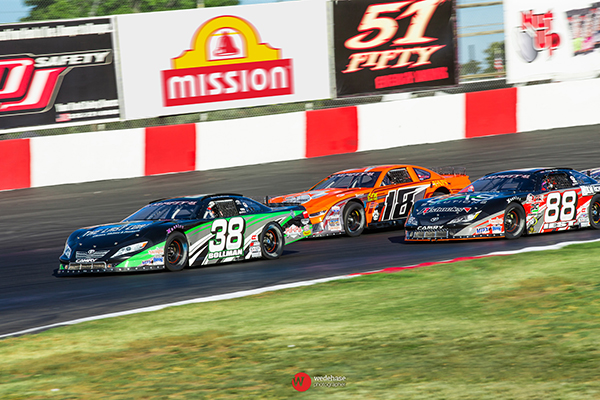 MADERA, CALIF. (August 18, 2020) – Mission Foods, one of the world’s largest producers of tortillas, has joined forces with Madera Speedway to promote grassroots racing through Madera Racing on MAVTV. Mission’s Racing Style Tortilla Chips will be prominently featured throughout the series, which airs Mondays at 5pm and 6pm on MAVTV.

Mission will have trackside billboards promoting their chips and the hashtag #2FAST2TASTY. Each 51FIFTY Jr. Late Model Series and Nut Up Pro Late Model Series race broadcast will include the Mission halftime show. Each episode of Madera Racing on MAVTV will also include two onboard cameras. The Mission Foods cameras will help talented drivers gain more exposure and will rotate onto different cars each race.

“We are very excited to partner with Madera Speedway and support short track Racing,” Juan Gonzalez, President and Chief Executive Officer of Mission Foods, said. “This gives us a great opportunity to not only interact with our consumers in a fun and exciting environment but also support young talented racers to build a career in the motorsports industry. I strongly believe that our partnership will create unforgettable moments for all race fans.”

The speedway pioneered the Jr. Late Model concept in 2016, bringing drivers ages 10-16 years old to a national television audience in full size stock cars for the first time. Partnerships with industry-leading companies such as Mission Foods allow Madera Speedway to further its goal of being one of the best farm systems in the nation for young racing talent.

“Our passion is Short Track Racing and our ‘Mission’ is building stars from it,” Kenny Shepherd, President of Short Track Management, said. “I’m extremely excited to have Mission Foods join our program at Madera Speedway. They were one of the first major brands onboard my race car 26 years ago as I joined the NASCAR Southwest Tour. They are passionate about helping us in our efforts to help young talent grow in motorsports, while at the same time provide a fun short track racing platform for their consumers to enjoy in person and on national television.”

The 2020 racing season at Madera Speedway has already included several groundbreaking achievements, despite the global pandemic taking place. The speedway is hosting a three-race Pro Late Model series for drug awareness under the Race 2B Drug Free Big3 moniker, offering the largest purses and bonuses in track history.

Regional community partnerships such as those with the Carlos Vieira Foundation and the Valley Children’s Hospital are enhanced as the speedway grows through national sponsorship and notoriety. The MAVTV program began at Madera in 2015 with eight, 30-minute episodes. It has since grown to encompass a weekly show in prime time that features a new episode every two weeks with more than twenty hours of programming from the one-third mile oval each year.

The remaining dates for the Madera Racing on MAVTV Late Model filming schedule include events on August 22, September 5, September 19, October 3, and October 17. Two special events and several documentaries are also planned for broadcast. New episodes air every other week in tape delay for a primetime television format.