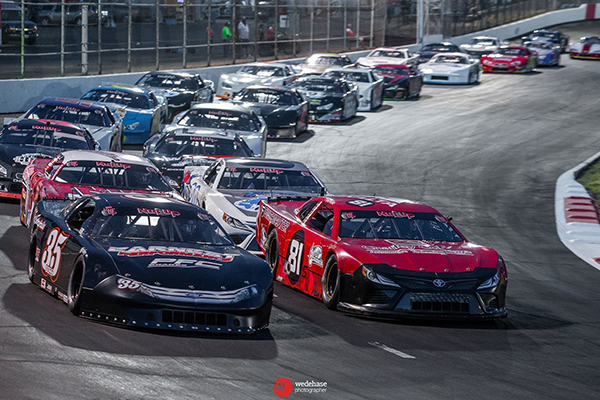 MADERA, CALIF. (July 21, 2020) – The highest-paying Late Model program in Madera Speedway history begins this Saturday night, as the Race 2B Drug Free Big3 Series within the Nut Up Pro Late Model Series begins at the one-third mile oval. Drivers will duel for $5,000 to win in the 100-lap feature, televised on MAVTV. More than $75,000 in bonuses are also up for grabs throughout the lucrative three-race affair.

“I’m sure some more stout cars will come down. That bonus money is going to be really really tough to get to,” points leader Buddy Shepherd said. “We have more laps to make stuff happen. I think with the piece we have right now, we have a really good shot at making some good money. Can’t wait to go run with those guys.”

51FIFTY Jr. Late Models for 70-laps and Mini Cups vs. Bandoleros for 30-laps will also be competing during the event. Grandstands remain closed due to COVID-19 industry guidance, but Madera Speedway and Nut Up Industries will provide a free live stream. Race fans can tune in to Short Track TV on YouTube at 6pm Pacific for the coverage at https://bit.ly/3h98YqH

The Race 2B Drug Free Big3 includes multiple bonuses for driver performance. Drivers in the Big3 will be competing for a special point fund with $5,000 for the champion, $2,500 for second, and $1,000 for third.

A $10,000 bonus has been offered if any driver can sweep all three races. A $10,000 “Triple Main Challenge” will be offered for the fast-time qualifier. If that driver can win the C Main, B Main, and feature all from the rear of the field they will win the bonus. An additional $5,000 bonus will be awarded if a driver can sweep all three fast-time awards. $5,000 bonuses have also been posted for finishing in the top-three in all three races, leading the most laps in all three Big3 races, and a bonus for winning all three B Mains.

The goal of the Race 2B Drug Free Big3 Series is to bring awareness to programs designed to help those fighting addiction and to promote the stories of people that have fought their way out of addiction.

Buddy Shepherd of Bakersfield has won the first two rounds of the Nut Up Pro Late Model Series, but the defending winner of the $5,000 to win July special is Jeremy Doss of Upper Lake, CA. Doss won four of his five starts in 2019 with a dominant performance. Doss will have to come out ahead of the best in the west to repeat in 2020. Shepherd won the 2018 edition of the event.

His championship advantage after two rounds in 2020 stands at 26 points over Ross Strmiska. 2007 Altamont Raceway Park champion Ryan Philpott is having a strong start from third in the points. Blaine Rocha and Matt Erickson round out the top-five. Erickson was winless at Madera Speedway in 2019, despite an unrivaled resume of success in the Pro Late Model division. Erickson won the 2016 event and parlayed that into the championship that year.

The 100-lap event will be spread across two 50-lap segments, with a break in the middle for adjustments and MAVTV interviews.

The supporting 51FIFTY Jr. Late Model Series will compete for 70-laps, with nearly 20 drivers competing in each race so far. Topping them all has been 15 year-old Seth Wise of Bakersfield, with three consecutive victories ahead of the field of drivers ages 10-16 years old.

Bradley Erickson has run second into the lap 40 race break in both events this year to rank second overall in the standings. Jadan Walbridge has parlayed his qualifying prowess to third with Cole Brown and Jake Bollman rounding out the top-five. 16 drivers have competed in both rounds so far this year but Wise is the only driver in the field with a victory under his belt.

Jeffery Erickson has led the charge for his family in the Mini Cup vs. Bandolero division, taking both Bandolero wins and leading the championship. Bandolero rookies Caden Cordova and Joey Kennealy round out the top-three. Rebecca Dubie has won both Mini Cup portions of the main events this year, leading Harley Kennealy in the standings. The youngest drivers at Madera Speedway will compete for 30-laps this weekend.

Activities get underway on Friday with practice. Pit gates open at 2:30pm with the track open from 5pm to 9pm (high side only from 8-9pm).

On Saturday, pit gates open at noon with practice beginning at 2pm. Qualifying will be at 3:30pm with the Mini Cup and Bandolero heat races and the $1,500 to win Nut Up Pro Late Model B Main to follow. Main events will begin at 6pm.