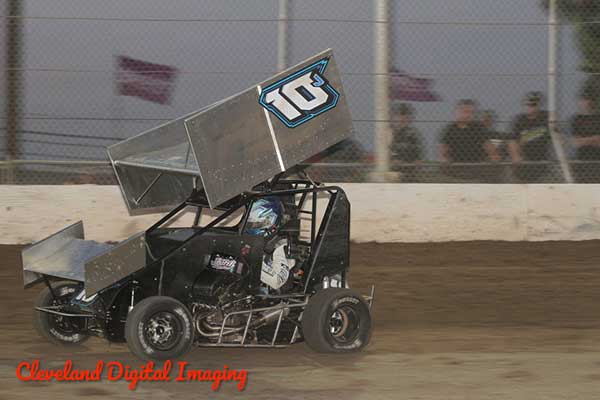 STOCKTON, CALIFORNIA (June 20, 2020) – Raisin City’s Mitchel Moles continued to be a terror on the Micro Sprint scene in California, completing a sweep of both the Super 600 and Non-Wing features on Saturday night at Delta Speedway. The final night of the season opening Summer Sizzler saw both main events pay $750 to win along with Moles picking up a $500 bonus for winning both Non-Wing features over the weekend.

Moles led just the final handful of feet of the Super 600 feature, winning in dramatic fashion as he nipped Travis Labat at the line.

Brentwood’s Jeffrey Pahule, Jr. led early from the pole position while Moles tried to work his way forward from the sixth starting position. Fresno’s Raio Salmon used a lap one caution to take the lead and Pahule fell back to the fifth position. Labat started to make the inside work the Salmon went to the bottom as well, taking away Labat’s momentum.

Moles started to roll the outside effectively, nearly grabbing the lead before a red flag on lap nine for Hailey Wood flipping on her side in turn one. Salmon went upstairs into turn one on the restart in front of Moles, while Labat continued to run the bottom line.

With five laps to go, Moles was on the high side while Labat led from down low. Moles chipped away lap after lap, getting himself into position as the leaders approached lapped traffic. Coming to the checkered flag, Moles swept around the outside of Labat to win by a nose in a thrilling conclusion to the weekend. Salmon finished third ahead of Caden Steele and Friday night winner Caden Sarale.

Moles’ Non-Wing win on Saturday came in a series of late race restarts against 2019 track champion Sarale. Sarale earned a final opportunity on lap 28 but was unable to capitalize, leading to Moles taking command for the checkered flag.

Tim Vaught led the opening lap with Sarale moving up into the second position. Moles quickly advanced from sixth starting position into third by lap four. The first caution flew on lap seven for Ashton Torgerson and Dylan Bloomfield spinning in turn four.

Moles grabbed second on lap eight before the caution flew for an incident involving Cameron Paul and George Nielson in turn two. Moles used the following restart to take the lead, taking over the top spot on lap ten.

Vaught, Sarale, and Escalon’s Brandon Shaw lined up on the top side of the speedway in a close battle for second around the halfway point of the feature. A caution for Drew Laeber spinning erased Moles’ comfortable lead. Sarale and Shaw used the restart to work past Vaught for second with ten laps to go.

Laeber and Bloomfield had an incident on the front stretch which ended both of their evenings as their second cautions of the race. Moles managed to pull away from Sarale but another caution flew on lap 25 for Mike Graves and Tyler Chamarro tangling. An additional red flag came out on lap 28 for Vaught going up in smoke in turn four. Moles managed to keep the lead over the final two laps ahead of Sarale, Shaw, Denver, NC’s Brent Crews, and Sage Bordenave. The $500 bonus came courtesy of Elk Grove Ford, Forbidden Motorsports, and NorCal Builders, lifting Moles’ Non-Wing haul to $2000 for the weekend.

Parreira methodically worked past Teagan Moles for third on lap five, then passed Brandon Riveira of Tracy for second on lap seven. Parreira clawed towards Wood and pounced in lapped traffic, taking the lead on lap 17.

The lapped traffic continued to play a factor as Parreira got hung up on the outside of lapped car Otto Parreira in turn two. Wood dove inside for a three-wide maneuver to re-take the lead at lap 23. Wood topped Parreira for $450 victory ahead of Riveira, Colin Kirby, and Reilee Phillips.

2019 Jr. Sprint champion Lucas Mauldin of Rancho Murrieta returned to victory lane with a flag-to-flag victory. Friday night winner Hayden Stepps of Oakdale drifted back to fourth early in the main event. 2019 runner-up Kyle Fernandez remained in hot pursuit of Mauldin throughout the feature but was unable to make a move. Mauldin, Fernandez, Bakersfield’s Nathan Ward, Stepps, and Brody Rubio were the top-five finishers.