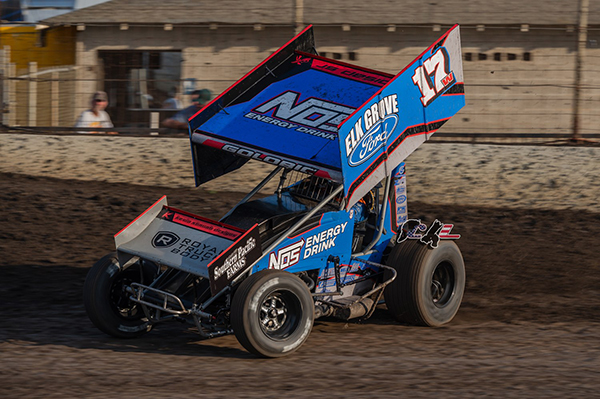 “Really good night with the Elk Grove Ford, NOS Energy Drink #17w. Got to thank DJ Netto for drawing the zero and putting us on the pole,” Golobic said. “I love coming back here. On a Thursday night, why not come down here and race. It’s weird without fans. That’s one of the cool things about this place – they have a good little fan base. The majority of why we do this deal is to interact with the people.”

21 cars took the green flag with Golobic moving ahead of Bud Kaeding, driving the #69 Al’s Roofing entry made famous by father Brent Kaeding. A big flip slowed the action early when Concord’s Joey Ancona tumbled into turn one. Fresno’s Eric Humphries then flipped over the top of Adam Kaeding as the drivers tried to avoid.

Bud Kaeding settled into second behind Golobic before coming to a stop for a lap seven caution. He rejoined the race at the rear of the field after a visit to the work area. 2019 King of the West champion DJ Netto of Hanford battled with Templeton’s Kaleb Montgomery for third. Contact exiting turn two caused damage to the nose wing on Netto’s entry.

The caution flew next for Burt Foland, Jr. and Bakersfield’s Josh Chisum getting together in turn two, with Chisum ending up on his side. Netto retired from the race under the caution with a flat left front tire among other damage.

Hollister’s Ryan Bernal, himself a multi-time wingless champion at the speedway, took over second position before his race ended with a stop on lap 15.

Golobic had a solid advantage at the checkered flag ahead of Montgomery and Gilroy’s Kurt Nelson. Bud Kaeding charged back through the field to finish fourth ahead of Hanford’s Zane Blanchard. Heat race wins went to Jason Chisum in a narrow in over Golobic, Bud Kaeding, and Netto. The Ocean Sprints presented by Taco Bravo continue Friday July 10th.

In other action, the Hobby Stocks staged a 40-lap feature to makeup for the cancelation due to curfew of their race last Friday. Austin VanHoff of Chowchilla led the opening lap over the 17 car starting lineup. Ken Winland flipped in turn one for a lap one red flag. He was uninjured.

The caution flew again on lap three when Rob Gallaher stopped on the backstretch. Terry Campion of Santa Cruz seized the opportunity to take the lead on the restart. Campion led the rest of the way ahead of Joe Gallaher, Santa Cruz’ Bobby Huckaby, Jr., Kristie Shearer of Atwater, and Watsonville’s Steve Remde.

The IMCA Sport Mods had the closest matched event in their 20-lap contest. Atwater’s Tanner Thomas took the lead from Watsonville’s Billy Robertson on lap seven and brought with him Bakersfield’s Michael Johnson.

Johnson, from tenth starting position, challenged Thomas in a tight formation the rest of the race distance. The pair of #22 cars made only the slightest amount of contact over the long battle, with Thomas edging ahead by a nose at the checkered flag. Kaylin Lopez of Chowchilla, Adriane Frost of Watsonville, and Timothy Allerdings from Arizona were the top-five finishers.

Four Bangers ran a pair of 20-lap features, with the first serving as a makeup for last Friday’s events. Selma’s Greg Baronian was the standout of the evening as the 2018 Central Valley Mini Stock champion was a factor in both events.

In the first main event, Baronian was spun early in the feature. He restarted at the tail but immediately drove forward, taking the lead from Ryan McClelland on lap 13. Coming to the finish in lapped traffic, McClelland swooped past on the outside to steal the win, however, by just a couple of feet.

Baronian would not be deterred in the second feature, taking the lead from Jesse Gullings on lap 11 en route to the feature win. McClelland scored second ahead of Gullings, Tony Gullo of Watsonville, and track champion Kate Beardsley was fifth.