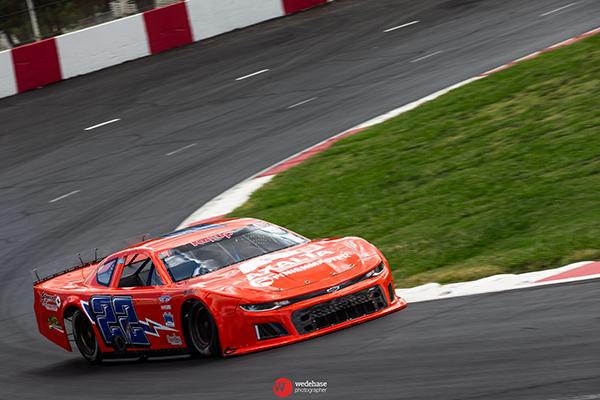 Shepherd’s night kicked off with a sizzling 14.962 lap in qualifying which he followed by winning the first heat race. Jacob Smith qualified second quickest ahead of 2019 Nut Up Pro Late Model champion Austin Herzog, with both winning their respective heat races as well.

Shepherd charged ahead at the green flag of the main event with Smith getting freight trained back to the fifth position. Logan Zampa navigated quickly from fifth into third as well. Matt Kutz spun to bring out the first caution flag. On the restart, Smith tried to make a pass into turn one but ended up spinning through the grass. The race stayed under green while Smith rejoined at the rear of the field.

Shepherd pulled away from Herzog until a caution on lap 19 when both Loren Kutz and Matt Kutz spun in turn four. The ensuing restart did not go in Herzog’s favor, as he surrendered multiple positions to fall back to sixth.

Logan Zampa attempted to battle side-by-side with Shepherd on the restart, but eventually fell backwards after half a lap of battling. Both Cook and Dylan Zampa moved past Logan, then Dylan managed to get around Cook for second down the backstretch with five to go.

Buddy Shepherd continued without another challenge, taking the victory by 3.371 seconds over Dylan Zampa, Logan Zampa, Cook and Trevor Schlundt.

2019 Modified Super Toyota champion Ryan Reynolds picked up where he left off by taking the checkered flag in their 2020 season opening 30-lap feature. 2017 champion Bert Stephens challenged Reynolds early in the main event. Shaun Reynolds muscled past Stephens on lap five for the second position. The Reynolds brothers ran virtually nose to tail after encountering lapped traffic at the halfway point of the race.

A caution on lap 23 for Dennis Brannon spinning in turn three tightened up the order. Ryan Reynolds had a strong start, which thrust Shaun into a battle with Stephens for second. The exclamation point of the race came on the backstretch, when Shaun Reynolds went up over the top of Stephens. The race stayed green and Ryan Reynolds drove off to victory. Patrick Geiger avoided the melee to finish second, followed by Shaun Reynolds, Kyle Labrie, and Stephens.

Andrew Parr led all the way in the Toyota Sedans, topping JJ Brandsen and Johnny Williams.

A full race production of the event will be available on Short Track TV on YouTube later this weekend. Madera Speedway plans to return to action on June 13th with Madera Late Models and Madera Hobby Stocks. More information will be released to RaceMadera.com