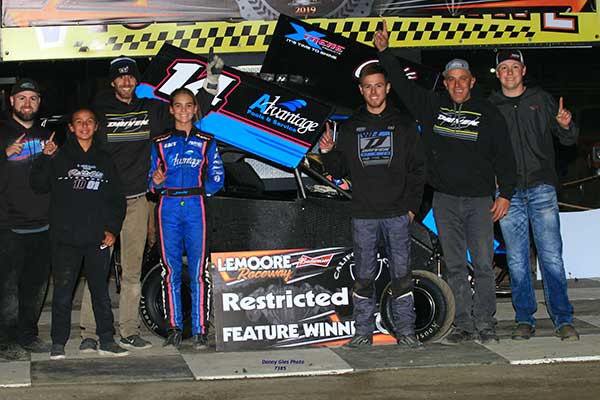 CLOVIS, CALIFORNIA (December 10, 2019) – 13 year-old Jade Avedisian of Clovis, CA set the Micro Sprint racing world on notice in 2019, amassing 11 wins on the way to the best season of her young career. Avedisian won both the Keller Auto Raceway at Plaza Park and Lemoore Raceway Restricted championships in the same year, and nearly pulled off the Delta Speedway championship as well.

These performances have bolstered Avedisian as she prepares for the prestigious 35th Tulsa Shootout, January 1-4 in Tulsa, Okla. at the River Spirit Expo Center. Her co-crew chiefs of Sean Cornell and Cole Christensen continue to take Avedisian’s program to new heights aboard the Driven Gen III chassis.

Avedisian opened the year with a victory in Restricted competition at Central Arizona Speedway in February. The 2019 California season started with a bang when she won the special non-points event at Delta Speedway during the World of Outlaws weekend in Stockton. In June, she finished third in the Hoosier Tire California Speedweek points. The campaign included a thrilling victory at Delta Speedway on night #2 of the speedweek.

While leading the Lemoore Raceway championship all summer, Avedisian battled for the Delta Speedway and Keller Auto Raceway at Plaza Park Restricted titles as well. In July, she traveled north to Washington for the $3500 to win Clay Cup at Deming Speedway. In the prestigious 30-lap race, Avedisian took over the lead on lap six and charged to a 3.126 victory in front of a standing room only crowd.

She added a pair of wins at Plaza Park in August including on August 23rd, which she followed with her first Lemoore Raceway Restricted victory the following night.

Her breakthrough California weekend may have been the Mark Hagopian Memorial. After a narrow second place finish during the Friday night portion, Avedisian was determined to win on Saturday night. She took over the lead on lap four and drove to a 1.531 second advantage ahead of a tremendous crowd of fans in Visalia.

A fourth-place finish in the Lemoore Raceway finale in October was enough to finish off her championship season, paired with the come from behind title at Keller Auto Raceway. She narrowly missed out on the Delta Speedway crown by 52 points from the third position.

Post-season competition included a win in the Friday night portion of the Cal Cup at Lemoore Raceway and a third-place finish during the Turkey Night in Visalia.

Victories in nearly every major micro event on the West Coast highlighted a season of over 50 race events. Avedisian will now try to win the biggest event of them all, the 2020 Tulsa Shootout in the Restricted A Class.