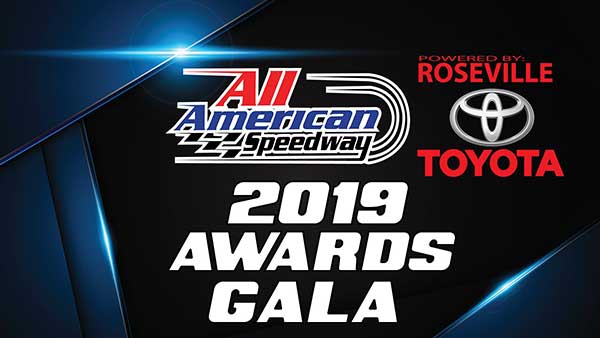 ROSEVILLE, Calif. (December 10, 2019) – The All American Speedway powered by Roseville Toyota will celebrate its 2019 track champions on January 18th, 2020 @the Grounds in Roseville. The Championship Awards Gala will honor drivers from all six weekly racing divisions at the NASCAR-sanctioned track. Special guest Larry McReynolds will be the Master of Ceremonies and will be joined by other special guests still to be announced.

Track champions include Jason Romero in the NASCAR Late Models, Nick Lyons in the NASCAR Limited Modifieds, Andrew Peeler in the NASCAR Super Stocks, and Ray Molina in the NASCAR F4 class. Brody Armtrout in the Jr. Late Models and Kenna Mitchell in the Mini Cup vs. Bandolero division will also be honored. All told, more than 40 awards will be handed out in a fun and exciting night. Cocktail attire is suggested for this special gala. Purchase of ticket includes reserved table seating and a catered dinner by Randy Peters Catering.

Tickets are available by visiting www.AllAmericanSpeedway.com Prices are $45 until January 7th and increase to $55 available until January 14th. Tables for ten are available for $400.00, before taxes and fees. Doors open at 5:30 pm. Door and raffle prizes will be offered along with a no host bar provided by @the Grounds.

The 2020 schedule for the All American Speedway is expected to be announced in the coming days. It will feature 14 racing events under the NASCAR banner.