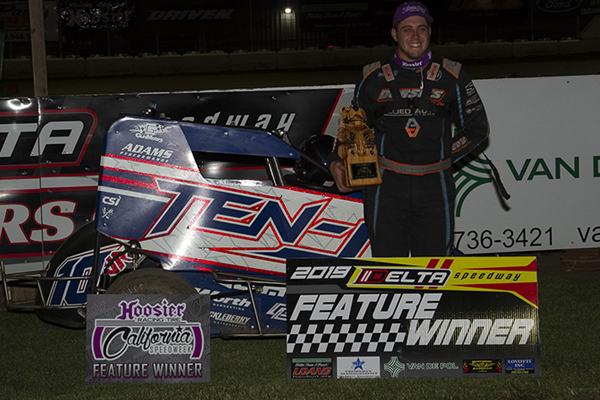 STOCKTON, CALIFORNIA (June 26, 2019) – Fremont’s Tristan Guardino held off Mitchel Moles for his second career Hoosier Tire California Speedweek Non Wing victory, grabbing Wednesday’s event at Delta Speedway in Stockton, CA. Guardino’s win is his first series triumph since July 9, 2016 when he was victorious at Lemoore Raceway. He was joined by Moles in Super 600 and Jade Avedisian in Restricted as winners at the 1/7th mile dirt oval at the San Joaquin County Fairgrounds.

Guardino started the feature alongside Bakersfield’s Troy Morris III who was utilizing a backup engine in the 30 lap event. After a four wide battle up front, Guardino prevailed with the lead. Fourth starting Moles advanced to second with the pair building up a strong lead ahead of 2018 champion Tj Smith and Tuesday winner Caden Sarale. The top-two cars quickly found themselves seeing lapped traffic on lap ten. Morris drifted from his pole position to 13th position.

Ben Worth spun in turn three for a caution on lap 13. One lap later, a three-car skirmish involving Worth, Brandon Carey, and Carson Myrick brought out the red flag.

The following restart saw Sarale and Smith make slight contact, dropping Sarale back to sixth position behind 16th starting Austin Stone. Sarale took fifth back from Stone before the red flag flew for Colorado’s Chase Hyland flipping in turn one.

After the lap 20 red flag, Moles took advantage to try to crossover Guardino for the lead with Smith sticking his nose in there as well. Guardino swung back into the lead one lap later while a battle ensued behind him. Sarale tried to make the bottom lane work but eventually went upstairs for the closing laps.

Guardino paced Moles in a narrow run atop the cushion for the $1000 victory with Smith topping Sarale for third. Stone rounded out the top-five as the Wilwood Hard Charger of the event.

Jade Avedisian became the second female racer to win in the California Speedweek history when she topped the 22 car, 25 lap Restricted feature. The 2019 Lemoore Raceway points leader earned her third Delta Speedway win of the season as well.

Tuesday night’s runner-up finisher Dawson Faria spun in turn one from the sixth starting position and was hit by Emerson Vincent for a caution on lap one. The next attempt at the first lap was troublesome for Oklahoma’s Ryan Timms, the Dixon winner, when he had contact with Bryant Bell. Both were unable to continue.

Delta points leader Logan Trevino jumped ahead with the lead by three car lengths before another caution for Washington’s Carson Borden spinning in turn three. Washington’s Lane Taylor jumped upstairs and battled with Gauge Garcia and Izaak Sharp for third. Taylor cleared Garcia on lap four and turned his attention to Sharp for third.

Eli Bookout started tenth and started to challenge Garcia for fifth with quick time qualifier Reilee Phillips in lockstep with them as well. Lapped traffic entered the fray on lap 14 with the traffic running side-by-side in front of the leaders on lap 17.

Avedisian closed on Trevino in hot pursuit, making a dramatic move up onto the turn four berm to take the lead on lap 21. Trevino continued to put the pressure on Avedisian all the way to the finish. Avedisian topped Trevino, Sharp, Garcia, and Bookout for the top-five after Taylor retired with a mechanical issue.

The Super 600 proceedings ripped the Speedweek standings wide open with Mitchel Moles grabbing his 19th win of 2019 and a much sought after first California Speedweek bear.
The start was a wild one as Ben Worth tumbled into turn one, collecting Nikko Panella, Keith Day, Jr. and Mason Keefer as drivers jockeyed to avoid the incident. Worth was uninjured but out of the race. Dixon winner Michael Faccinto was forced into the infield with mechanical problems and never completed a lap of the feature.

Faccinto’s troubles placed the Super 600 battle squarely on the shoulders of Moles and Dixon runner-up Jake Hagopian. Enumclaw, WA’s Colby Thornhill had a thrilling charge through the pack, passing both Brad Hannum and Texan Chase Randall to assume fourth from 14th on the grid. A caution on lap 12 for Cody Key spinning put Thornhill on top of Corey Day, with Thornhill grabbing third on the restart.

The drivers in the pack both looked high and low with Moles and Hagopian anchoring the top of the race track. A caution on lap 21 for Brandon Carey stopping in turn two erased a small lead Moles had built over Hagopian as they approached lapped traffic. Moles got a slight jump on Hagopian on the restart which allowed Thornhill to challenge Hagopian for second.

Moles pulled away for the $1000 win with Thornhill getting second place ahead of the 2018 Speedweek champion Hagopian. 2014 Delta champion Travis Labat moved from 11th to fourth with Corey Day finishing fifth.

Action gets underway with pit gates opening at noon. The drivers meeting takes place at 3:30 p.m. with hot laps and qualifying to follow. Action can be viewed live on Fast Four Media all week long. Visit www.FastFourMedia.com/buy for more information.