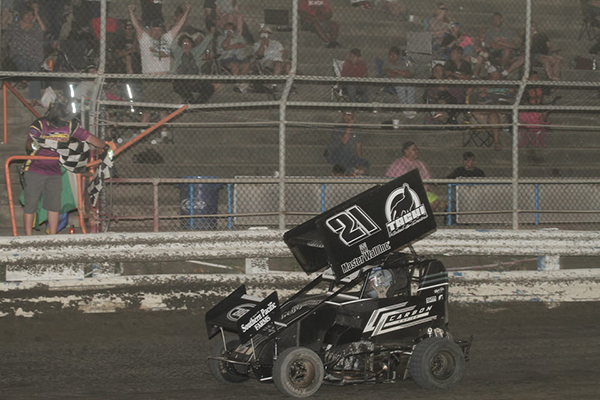 Delta winner Jade Avedisian and incoming Restricted points leader Logan Trevino came into the feature separated by five points in the overall series. Garcia came away from a wild start with the race lead, when Joshua Rogers got sideways from the outside pole position. Avedisian was impacted greatly by the incident, getting pinned down on the berm and falling to tenth position. Oklahoman Rees Moran got sideways on the backstretch as well in the fracas, but the race stayed green.

Logan Pennman of Auburn spun in front of the leaders on lap eight for the first caution of the race. Garcia led a tight lead pack that included Dixon winner Ryan Timms and Roseville’s James Andrichuk running very closely together on the restart. Washington’s Lane Taylor spun in turn two which led to Vancouver, WA’s Becca Clark flipping trying to avoid. Racing resumed with the leaders continuing to battle nose-to-tail.

A big crash put an exclamation point on the race. Avedisian dove inside Dalton Parreira for sixth position in turn four. The duo got hooked together, driving up into the frontstretch well and getting hit by Taylor and collecting Reilee Phillips as well. Avedisian’s race was over.

Garcia managed to pull away from Timms slightly on the restart. With the bottom being the preferred groove, Timms tried backing into the corner and crossing over Garcia on numerous occasions to no avail. Garcia grabbed his first California Speedweek bear and the points lead ahead of Timms and Andrichuk. Eighth starting Dawson Faria used to some nifty outside moves to finish fourth ahead of Rogers. Auckland, NZ’s Emerson Vincent won the Wilwood Hard Charger.

Mitchel Moles took a commanding victory in the 30 lap Non Wing feature that also paid $1000 to win. Moles drew the #1 for the first time during the week’s redraws and led early while Delta winner Tristan Guardino of Fremont looked low on Coalinga’s Ben Worth for fourth. The yellow flag flew for Arizona’s Mason Keefer spinning in turn four.

Moles and Tj Smith built up an advantage over the rest of the pack and encountered lapped traffic by lap seven. Smith tried diamonding turns one and two several times, parking the car on top of the cushion and swooping down to the bottom to exit turn four. The maneuver paid off when Smith took over the lead on lap ten. A caution came out on the next lap for Jimmy Leal up against the turn two fence.

Stockton’s Caden Sarale and Sacramento’s Austin Stone ran side-by-side for third before red flags for flips for Brandon Carey on the frontstretch and later Bakersfield’s Troy Morris III on the backstretch. Moles swept around Smith on the outside to lead lap 14 with Sarale taking second as well. Colorado’s Chase Hyland fell out of the race on lap 15.

Moles charged to an insurmountable lead over the final half of the race while Smith and Sarale dueled for second. Lapped traffic within the final seven laps did not allow Smith to close on Moles, who took the win by 6.114 seconds in one of the most complete performances in Speedweek history. Smith led Sarale, Worth, and Stone as the top-five finishers.

Michael Faccinto added his second Hoosier Tire California Speedweek win of 2019 on Friday night. Faccinto drove around the outside of Texan Chase Randall to lead lap one. Mitchel Moles used a slidejob in turn three to take second from Randall as well. Faccinto and Moles danced in and out of lapped traffic. Moles tried to slide past Faccinto into turn three on multiple occasions but fell short on each attempt. Corey Day moved through the pack from his seventh starting position to get around Randall for third with ten laps to go.

Washington’s Collin Mackey tagged the turn one wall for the last caution of the race which found Nikko Panella emerging in the top-five. Moles found something late on the Day but it was a fight for the runner-up position. Faccinto took the win with Day fending off Moles for second. Panella and Ben Worth rounded out the top-five. Raio Salmon advanced from 16th to sixth to be the Wilwood Hard Charger.

The 5th annual Hoosier Tire California Speedweek champions will be crowned Saturday night at Lemoore Raceway! Mitchel Moles leads Super 600 over Michael Faccinto while Tj Smith leads a Non Wing battle with the top-four within 24 point of the lead. Gauge Garcia anchors Restricted by just 21 points over Logan Trevino. Action gets underway with pit gates opening at noon. The drivers meeting takes place at 3:30 p.m. with hot laps and qualifying to follow. Action can be viewed live on Fast Four Media all week long. Visit www.FastFourMedia.com/buy for more information.