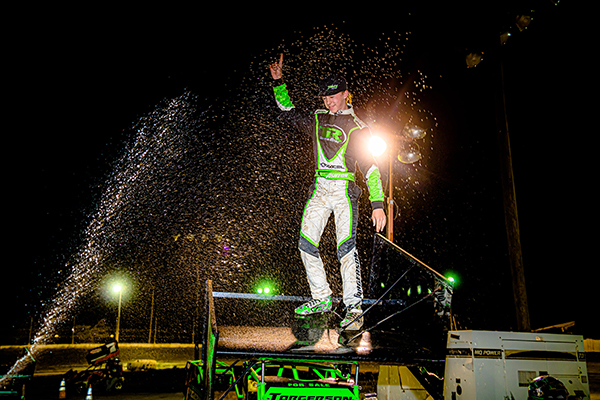 “Ashton is a great fit for Rowdy Energy! On the track he’s very fast, has won some races and is developing in his craft of dirt micro sprint racing,” Busch said. “As he travels up and down the west coast at a variety of different tracks, he’ll be a great ambassador for our brand and help us create awareness of our product as we continue to increase our portfolio of vendor partners up and down the west coast.”

Torgerson turned heads at the 37th Tulsa Shootout, winning three heat races during the largest and most prestigious Micro Sprint race in the world. The two-time Lonnie Kaiser Memorial Super 600 winner claimed the 2021 Dixon Speedway track championship. He was also a champion at Dixon Speedway in 2019 in the Restricted division.

The 2022 season for the No. 02 Rowdy Energy-sponsored Micro Sprint will see Ashton Torgerson competing for the Dixon Speedway and Stockton’s Delta Speedway championships. He will compete in major Micro Sprint events at all four California tracks and add major events at Adobe Mountain Speedway in Glendale, Ariz. as well. He will compete in over 60 race days with both Wing and Non-Wing competition planned.

“It means a lot as a young driver to have the backing of a NASCAR Cup Series champion and to become a Rowdy Energy athlete,” Torgerson said. “I can’t wait to go racing and go for wins and championships with Kyle’s support!”

Rowdy Energy was founded in 2020 by accomplished NASCAR driver, Kyle Busch and notable entrepreneur, Jeff Church with a focus on wellness. The beverage is formulated with sequenced energy release of caffeine, sugar reduction ingredients, amazing taste, and higher levels of electrolytes than sports drinks. A can of Rowdy Energy has 160mg of naturally occurring caffeine. Derived from caffeine from green tea, Rowdy Energy pairs their caffeine with the nootropic L-Theanine giving you a powerful lift without the unwanted and irritable crash. The beverage is currently available in ten flavors – Strawberry Lemonade, Cherry Limeade, Peach Mango, Blue Raspberry, Sour Green Apple, Orange Citrus, Cotton Candy, Chiseled Ice, Grape and Lemon Lime  – (seven of which are sugar-free and KETO certified). Rowdy Energy is available for purchase online at https://rowdyenergy.com/ and in select grocery and convenience stores nationwide.