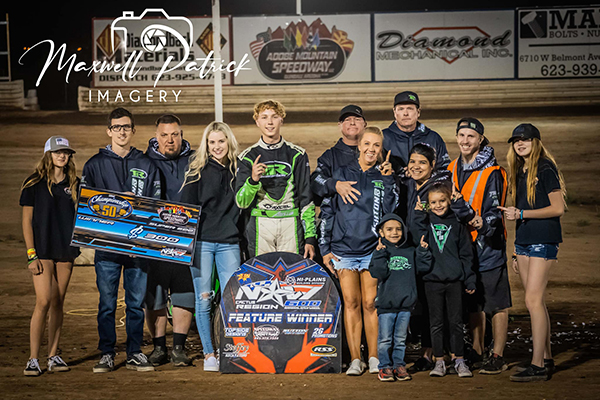 The lucrative night of NOW600 Cactus Region action attracted 32 cars to the 1/6th mile north of Phoenix. Austin Torgerson finished second in heat race two while Ashton Torgerson finished third in heat race competition. Austin led all 50-laps of the feature while Ashton was on the charge. Ashton Torgerson moved into second by the 11th lap. A series of restarts gave Ashton a shot to show his nose to Austin, but Austin maintained the top spot for the victory. Ashton’s second place finish paid $700 as well.

Kyle and Samantha Busch spent time with Torgerson Racing while their son Brexton competed in the Jr. Sprints as well.

Torgerson Racing also participated in the Four Stroke Showdown at the adjacent Phoenix Kart Racing Association in their first kart race in a year. Austin Torgerson picked up a fifth-place finish in Sunday’s action.

Torgerson Racing’s Micro Sprint program will continue with the 37th Tulsa Shootout on December 29, 2021 through January 1, 2022 at the Tulsa Expo Raceway in Oklahoma. Both Ashton and Austin Torgerson are entered to compete in a quadruple duty with racing in A-Class, Stock Non-Wing, Outlaw, and Outlaw Non-Wing. Action will be streamed live on www.FloRacing.com