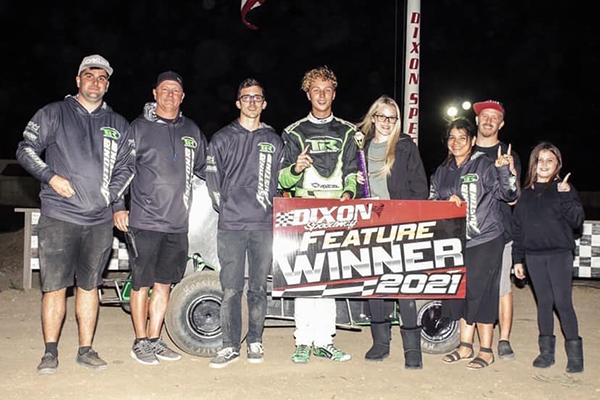 Medford, Ore. (September 14, 2021) – 18-year-old Austin Torgerson of Medford, Oregon has had a sensational September in Non-Wing Micro Sprint racing in California, leading Torgerson Racing to a pair of wins and a special event championship over the last two weekends of competition. Torgerson scored victories at Keller Auto Raceway in Visalia and Dixon Speedway and added a championship in the Hoosier Tire Dual at Delta as well. Photo by Tori Kott

The Dual at Delta took place over Labor Day weekend in Stockton with an outstanding field of over 40 cars in competition. Austin timed in fourth quick. Both Austin and younger brother Ashton stamped tickets to the feature after top-four finishes in their heat races. The inversion placed Austin fourth in the grid for the 30-lap contest on Saturday night before he drove to a third-place finish. He added a 13th place finish in the Super 600 main event as well. Ashton finished sixth in the Super 600 feature.

Sunday qualifying saw Austin time in seventh while Ashton earned quick time over 34 qualifiers. Austin finished second in his heat race while Ashton finished third in his. A fourth-place finish in the feature sealed the deal for Austin Torgerson to win the $2,000 Hoosier Tire Dual at Delta championship. The performance also booted Austin to second in the championship standings.

On Friday, Austin Torgerson raced at Keller Auto Raceway in Visalia. He timed in sixth, then finished second in the heat race. Starting on the pole, Torgerson led all 30-laps for the coveted victory. The Torgerson Racing team took its show on the road north to Dixon Speedway, where Austin Torgerson nearly earned a clean sweep of Non-Wing. He led the 22-car field in qualifying and won his heat race before finishing second in the dash. Lining up second, he took over the lead by lap six and never relinquished it in the 25-lap feature. Despite missing three events, Austin Torgerson ranks third in the Dixon Speedway championship standings.

Torgerson Racing will race on Wednesday night at Delta Speedway for their next championship points race.