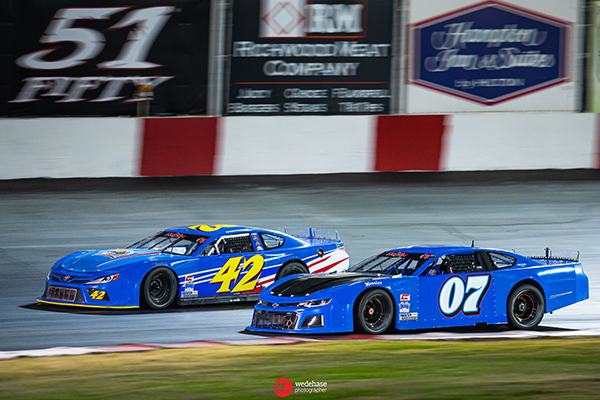 MADERA, CALIF. (September 28, 2021) – The 2021 Nut Up Pro Late Model championship will be decided this Saturday night in the ninth annual Short Track Shootout 150 for $10,000 to win at Madera Speedway. The MAVTV-televised race serves as the ninth round of the season and will be joined by the 51FIFTY Jr. Late Models and INEX Bandoleros in their championship finales at the one-third mile speedway. Photo by Jason Wedehase

Ticket information can be found at: http://racemadera.com/ticket-info.html with online sales available through MyRacePass. Tickets can also be purchased at the gate. Race fans can also view the live streaming coverage on Short Track TV on YouTube beginning at 6:00pm Pacific.

A wide-open entry list is expected to produce a first-time Short Track Shootout winner, with points leader Jadan Walbridge of Vancouver, Wash. as the prime favorite. The 16-year-old Walbridge has won two of the last three races in the series and enjoys a 19-point advantage ahead of Tyler Herzog. Matt Erickson is the most successful driver in the history of the Pro Late Model division at Madera but is still winless in this October classic. He ranks third in the championship with a 27-point margin to overcome this weekend.

Las Vegas’ Kyle Keller is another 16-year-old driver poised to contend for the win. Keller recently wrapped up the non-televised Madera Late Model championship on September 25 and won round eight of the Nut Up Pro Late Models on September 18. The performances book ended a top-five in the ARCA Menards Series West at his home track The Bullring at Las Vegas Motor Speedway. Keller is fourth in the Nut Up standings with an outside chance to challenge for the series championship.

Jason Aguirre rounds out the top-five in the series. The accomplished Madera Speedway champion has yet to win a televised race and could grab his first MAVTV checkered flag in the biggest event of the season.

2019 Southwest Tour runner-up Linny White of Colton, Calif. is one of several visiting drivers looking to play spoiler for the five-figure payday. White podiumed twice at Madera during that 2019 Tour campaign along with a 2017 Lucas Oil Modified win during the Short Track Shootout race night in 2017.

The Nut Up Short Track Shootout is a 150-lap grind with a 100-lap opening segment followed by a ten-minute break on track for adjustments and MAVTV interviews. 50-laps of competition close the race with $10,000 awarded to the victor.

A loaded field of 51FIFTY Jr. Late Models is expected this weekend for a 70-lap race for drivers ages 10-16 years old. Eagle, Idaho’s Jacob Smith has not seen victory lane since April 24, but has used consistency to hold a nine-point lead. Smartsville’s Brody Armtrout has won five consecutive features to rank second in the standings.

Three previous champions in the division have won five races in their title winning campaigns, including Bradley Erickson, Joey Iest, and Jesse Love. Armtrout aims to be the latest driver on that prestigious list. Manteca’s Ethan Nascimento, Texan Barrett Polhemus, and Colorado’s Holly Clark round out the top-five. Each Jr. Late Model race is split across a 40-lap opening segment and a 30-lap race to the finish.

Action gets underway on Friday with practice from 5pm until 9pm with pit gates opening at 2:30pm. On Saturday, pit gates open at 11am with practice at 1pm. Qualifying hits the track at 3pm followed by Bandolero heat races. A 30-lap, $1,000-to-win B-Main will be held if needed. Short Track TV goes live at 6:00pm with opening ceremonies and the three features to follow.

For information about Madera Speedway, visit www.RaceMadera.com The 2021 season would not be possible without the support of Nut Up Industries, 51FIFTY LTM, Mission Foods, 805 Beer, Race 2B Drug Free, Competition Carburetion, Hoosier Tires, and Sunoco Race Fuel.