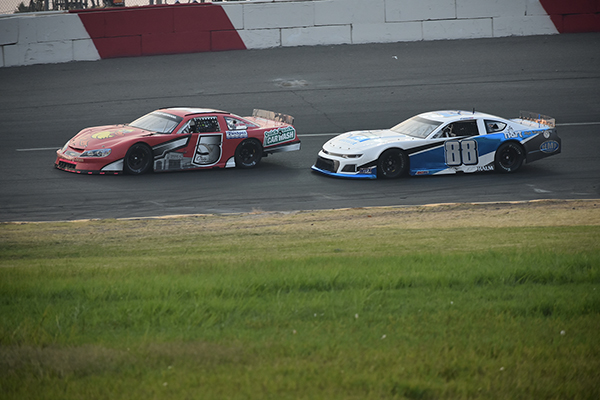 All American Speedway has partnered with Keaton’s Child Cancer Alliance for a raffle at races during childhood cancer awareness month. Buy a raffle ticket at the event to support the cause and you could win a ride in a NASCAR stock car or even an autographed door from a NASCAR Late Model.

Grandstands open at 5pm followed by heat races for F4s, Super Stocks, and Modifieds. Opening ceremonies will be at approx. 6pm with main events to follow. Tickets for NASCAR Racing and the Riebes Auto Parts Trailer Bash are online only at www.AllAmericanSpeedway.com All seats are general admission, priced at $20 for adults, juniors ages 6-12 are $14, and kids 5 & under are FREE!

Lincoln’s Alan Bridgman and Roseville’s Loren Chitwood have split the $1,000-to-win Riebes Auto Parts Trailer Bashes this season. Drivers compete in a 15-lap race utilizing portions of the infield and the one-third mile paved oval. Drivers try to collide with each other’s trailers. The first car across the finish line with its trailer still attached is declared the winner. Prizes for best theme and master of disaster are decided by the crowd. All American Speedway and Bill McAnally Racing Promotions will offer contingency prizes valued at several hundred dollars to every driver who competes in both Saturday’s Trailer Bash and the season finale on October 23. Prizes are offered from Optima Batteries, K&N Filters, and NAPA Tools.

Granite Bay’s John Moore was kept out of the winner’s circle during the lucrative JM Environmental Saturday Night Fever 100 on August 28. But a pair of top-five finishes boosted the veteran driver to a 15-point lead in the NASCAR Berco Redwood Late Models ahead of Auburn’s Thomas Martin. Fort Bragg’s Aidan Daniels, Loomis’ Michael Mitchell, and Napa’s Dylan Zampa round out the top-five heading into Saturday’s Twin 35-lap main races.

Eric Price of Sacramento leads the Jaws Gear & Axle Modifieds with six wins, while 2020 champion Jason Philpot of Sacramento just earned his first win of the season. Colfax’s Ralph Bailey, Foresthill’s Jon Yourd, and Rocklin’s Tyler Wentworth are the top-five in the championship. The Riebes Auto Parts Super Stocks are led by Josh Whitfield after the Roseville driver earned his seventh triumph in the last event. Defending champion Andrew Peeler of Carmichael, Roseville’s Jeremy Fritts, the driving team of Gary Eisenhour and Harry Lambert, and Blake Disomma are the top-five. Both divisions will race in 30-lap events on Saturday.

Roseville’s Ray Molina has an 18-point lead over Matthew Fuhs of Roseville in the F4 championship. Each driver has one win this year with Lincoln’s Brandon Frantz earning a single victory to rank third heading into this week’s 25-lap race. Auburn’s Colton Nelson has three wins in the Mini Cup/Bando division where Roseville’s youngest drivers race in a 20-lap contest. Loomis’ Kenna Mitchell has won four of the six Jr. Late Model races for the points lead over Fort Bragg’s Lane Anderson with a 20-lap main event on tap.

Additional information on fan attendance is available at www.AllAmericanSpeedway.com Competitors will participate in practice activities on Friday before racing on Saturday. Grandstands open at 5pm. Heat races are scheduled for 5:15pm. Opening ceremonies will take place at approx. 6:00pm with features to follow. The Riebes Auto Parts Trailer Bash closes the show. Races will also be available on Pay-Per-View at www.AllAmericanSpeedway.TV