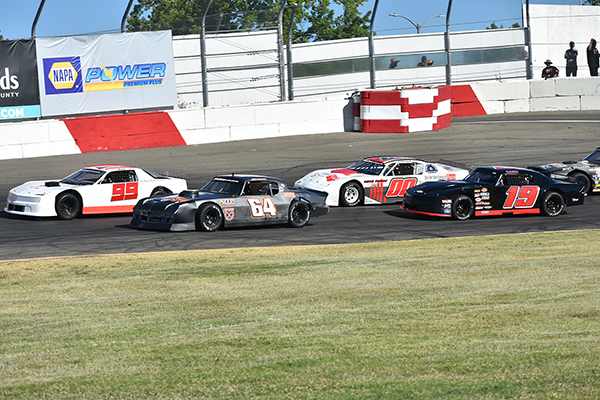 ROSEVILLE, Calif. (August 10, 2021) – NASCAR racing action, on-track autographs, and a candy toss are set this Saturday’s Back to School Night at All American Speedway powered by Roseville Toyota. Guaranteed Rate Affinity James Clark will offer $500 in bonus cash for the Riebes Auto Parts Super Stocks across a pair of 25-lap features. The Jr. Late Model Challenge sees drivers ages 10-16 years old competing while the drivers of the 1000cc UTVs will hit the asphalt as well. Jaws Gear & Axle Modifieds, F4s, and Mini Cup/Bando are also on tap. Photo by Don Thompson

Grandstands open at 5pm followed by heat races. The on-track autographs and candy toss begin at approx. 5:50pm. Main event action is slated to begin at 6:30pm. Tickets for Back to School Night are available online only at www.AllAmericanSpeedway.com All seats are general admission, priced at $20 except for kids five and under who are free.

The Guaranteed Rate Affinity Twin 25s for the Riebes Auto Parts Super Stocks will make a tremendous impact on the championship fight between 2020 champion Andrew Peeler and Roseville’s Josh Whitfield. Just three points separate the duo after seven main events of action. Only three nights of championship points races will remain after Saturday’s doubleheader. A total of $675 in bonus money offered by Guaranteed Rate and Riebes Auto Parts will be split across the two main events. Whitfield leads the division with four wins followed by Peeler’s two victories while Brandon White of Eureka earned his first win on July 24.

The inaugural Jr. Late Model Challenge serves as round five of the battle among drivers ages 10-16 years old. Loomis’ Kenna Mitchell has used two victories to enjoy a six-point lead over Lane Anderson of Fort Bragg who has one victory this year. Trey Daniels of Fort Bragg, the runner-up to Mitchell in the 2019 Mini Cup/Bando points, has scored a win as well to rank third in the points.

UTV Racing returns to All American Speedway for a six-lap heat race and a 15-lap main event on the asphalt oval. Cody Vanderveer of Sacramento won the dirt heat race in April before Fifer topped Vanderveer in the pavement feature. Round two will be an all-pavement night before the series returns to the dirt during the Malicious Monster Truck Tour on October 23.

Saturday’s action also includes points racing for the Jaws Gear & Axle Modifieds with Sacramento’s Eric Price in the lead with a 49-point cushion over 2020 champion Jason Philpot. Price overcame several incidents that relegated him to the rear of the field on July 24, charging back through the pack to finish seventh as the highest finishing Jaws Modified out of 24 cars in attendance for the Bob Lehman Classic. The performance counts as his fifth win of the year in seven tries, with Brandon White of Eureka and Josh Blackwood of Loomis as the other feature winners heading into Saturday’s 30-lap race.

Roseville’s Ray Molina has increased his lead in the F4 points to 22-points over Matthew Fuhs. The stock four-cylinder division has seen four different winners this year including Molina with one win. Other victors include two wins each for Nathan Cleaver of Roseville and Stephen Crook of Fernley, Nev. Rocklin’s Matthew Cockrum also has scored a checkered flag this year. Molina, Fuhs, Dennis Crook, Lincoln’s Brandon Frantz, and Cleaver make up the top-five in the standings with a 25-lap feature scheduled.

The youngest drivers at All American Speedway compete in the Mini Cup/Bando division, with the top-two both set for double duty across Mini Cups and Jr. Late Model Challenge this weekend. Auburn’s Colton Nelson leads 2020 champion Bella Thomsen of El Dorado Hills by 13-points. Lincoln’s Anthony Bean, Stockton’s Lucas Burton, and Lincoln’s Joseph Elf make up the top-five. 20-laps of main event racing is scheduled for Back to School Night.

Additional information on fan attendance is available at www.AllAmericanSpeedway.com Competitors will participate in practice activities on Friday before racing on Saturday. Grandstands open at 5pm. Heat races for Modifieds, Super Stocks, F4s, and UTVs are scheduled for 5:15pm, followed by on-track autographs and candy toss. Opening ceremonies will take place at 6:20pm with features to follow. Races will also be available on Pay-Per-View at www.AllAmericanSpeedway.TV