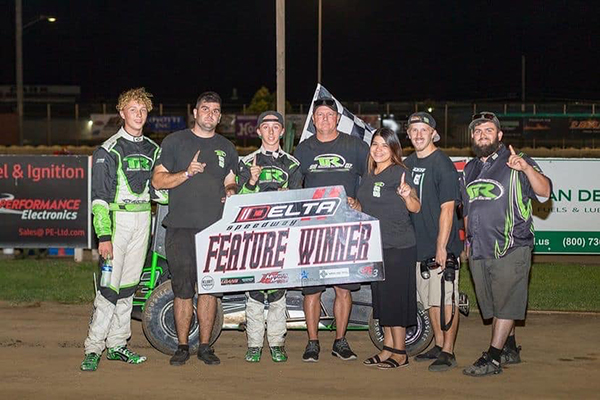 Medford, Ore. (August 10, 2021) – 15-year-old Ashton Torgerson led Torgerson Racing to a pair of wins in Northern California Micro Sprint action on Friday and Saturday nights, taking the Super 600 triumph at Dixon Speedway and a Non-Wing victory at Delta Speedway. Torgerson and his 18-year-old teammate and brother Austin Torgerson have enjoyed an outstanding 2021 season across the west in their black and green Ten-J Chassis.

Ashton qualified in the top-five in both Super 600 and Non-Wing on Friday night at Dixon Speedway. He went on to win both the dash and the heat race for the winged Super 600 cars while finishing second in his heat race in Non-Wing. His Super 600 feature performance was a dominating one, leading all 25-laps from the pole and accumulating a 1.475 second advantage at the finish.

Austin Torgerson competed in Non-Wing on Friday night with a fifth-place effort after starting seventh.

Saturday’s action at Delta Speedway in Stockton saw an outstanding 29 Non-Wing and 25 Super 600 cars on hand.

Torgerson Racing got their night off to a hot start in Non-Wing by sweeping the top-two in qualifying with Austin topping Ashton. Austin Torgerson added a heat race win with the brothers sharing the third row for the 30-lap, $500-to-win feature. Lapped traffic proved ferocious, providing Ashton an opportunity to seize the lead on lap 14.

Torgerson held off 2018 track champion Tj Smith for the win, while Austin encountered trouble that led to an 18th-place finish. Ashton added a fourth-place finish in the winged Super 600 competition as well.

The performances boosted Ashton to fourth in the Non-Wing championship, just 11 points behind Austin who ranks third overall out of 67 points earning drivers at the 1/7th mile bullring. Austin Torgerson also ranks fourth in the Super 600 division at Delta with a pair of top-five finishes to his credit.

Ashton Torgerson will race during Friday night’s Back to School Night action at Keller Auto Raceway in Visalia.