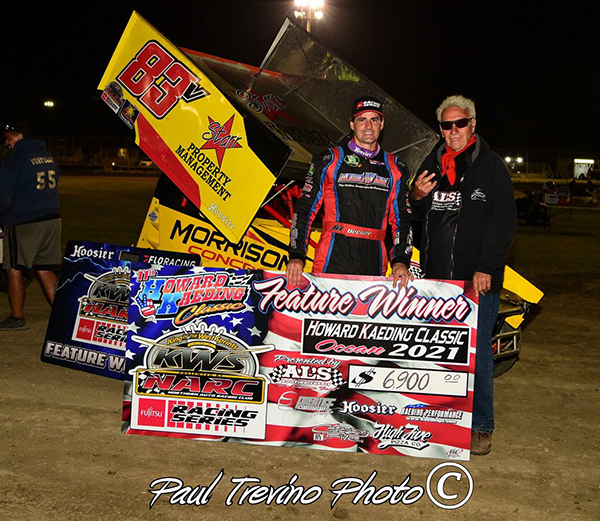 WATSONVILLE, CALIF. (July 18, 2021) – Roseville’s Sean Becker added another crown jewel to his career, earning the $6,900 victory in Saturday’s 11th running of the Howard Kaeding Classic at Ocean Speedway. The NARC King of the West Fujitsu Racing Series 30-lap feature had a tumultuous first half before Becker took command. He celebrated by climbing the front stretch fence and saluting the fans in Watsonville. Photo by Paul Trevino

Australian Jessie Attard took the lead from the outside pole with the caution falling on the next lap when B-Main winner Sean Watts of Atwater stopped on the backstretch with a flat left rear tire. 2015 Ocean Sprints champion Shane Golobic took over the lead on the outside on lap eight. Dash winner Corey Day of Clovis made a bid up the inside to enter the top-five but it was nullified by JJ Ringo of Morgan Hill going off track in turn two for a lap nine caution.

Tim Kaeding lifted his front wheels up from the second row on the restart, then collided with Golobic into turn one. Kaeding spun down the speedway with numerous cars colliding up against the inside berm. Ocean Sprints points leader Justin Sanders went upside down while Sacramento’s Kalib Henry, Bernal, and Roseville’s Willie Croft hit Kaeding. Defending HK Classic winner Kyle Hirst slid to avoid the melee and was clipped by Dominic Scelzi who flipped as a result. Several other cars were also involved. Croft was unable to continue but the other involved parties restarted at the rear after a lengthy red flag.

Kaeding then flipped on the restart attempt, requiring an open red flag on the ninth lap of the feature. Golobic surrendered the lead with a flat tire with Becker taking control of the race. Becker met lapped traffic by lap 12. Day fell backwards before drawing a caution on lap 14 in turn two. Gilroy’s Kurt Nelson had avoided trouble to advance from 22nd to seventh by that mark of the event.

Tanner and Blake Carrick each got the inside rolling on the restart to pass Attard. Attard and Blake Carrick collided on the front stretch with Attard spinning into turn one. Bud Kaeding and Nelson tangled on the front stretch as well, sending Bud into Ryan Bernal into turn one. The ensuing melee saw Ringo flip at the top of turn one requiring a red flag. Sanders and Ancona were eliminated from the race and several other cars had contact as well.

Becker charged forward over the final half of the feature, working through lapped traffic to earn the coveted Howard Kaeding Classic triumph. Tanner Carrick finished second ahead of 2020 Ocean Sprints champion Mitchell Faccinto, Blake Carrick, and Bernal. Blake Carrick won the $650 hard charger in a move from 18th to 4th at the finish.

An outstanding 23-car IMCA Modified field had a challenging feature cut short by caution flags with Rick Diaz of Los Banos getting the win. Diaz led lap one on the inside before Steve Pemberton of Salinas led lap two on the outside. After a pair of cautions, Diaz was back out front on lap four.

Jim Pettit was a part of several of the cautions including a hard crash when Nick Decarlo went over the top of him into turn three, collecting Aaron Crowell as well. A final caution on lap 16 cut the feature short with Diaz leading challenger Matthew Hagio for the win. 2020 Antioch champion Troy Foulger, DeCarlo, and 2020 Ocean champion Cody Burke were the top-five.

Chowchilla’s Austin VanHoff led all 20-laps for the Hobby Stock feature win. Initial outside pole sitter Sam Kennedy slowed on the first start attempt, then pitted for a flat tire. He returned to the speedway in front of the leaders to run at the tail end of the lead lap. VanHoff paced a tight formation of the top-five cars as they battled for the lead closely behind Kennedy. Dos Palos’ Ryan Hart spun from second place as the field came to the white flag in turn four. VanHoff topped Joe Willoughby, Adriane Frost, Joe Gallaher, and Rob Gallaher at the finish.

AJ Waltrip of Santa Cruz County Sheriffs led all 15-laps for the Police-in-Pursuit victory. 2020 champion Nate Graham started shotgun on the ten-car field but managed to drive to second position by lap eleven. Jackie Yeung of Capitola Police, John Hohmann from Scotts Valley Police, and Pat Sullivan of Gilroy Police made up the balance of top-five finishers. Ocean Speedway will host the IMCA Modifieds, IMCA Sport Mods, Four Bangers, and South Bay Dwarf Cars. Tickets available online at www.OceanSpeedway.com or at the gate.