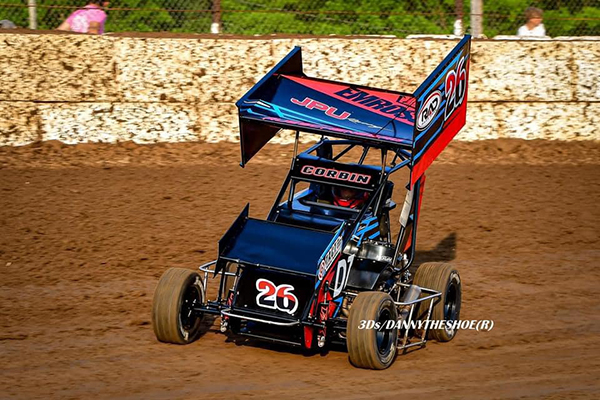 MESA, ARIZONA (June 15, 2021) – Corbin Rueschenberg of Mesa, Ariz. became the second consecutive west coast driver to invade the Midwest and win a championship in the Sooner 600 Week, taking the A-Class championship in the five-night series for the Lucas Oil National Open Wheel Series. The championship also propels Rueschenberg to second in the overall A-Class title fight, just 22 points out of first.

An opening night A-Class triumph at Caney Valley Speedway in Kansas on Thursday immediately put the championship in the sights for the driver of the #26 Driven Chassis. He continued a strong start with narrow runner-up performances at Creek County Speedway and Red Dirt Raceway as the Sooner 600 Week headed for the pivotal weekend rounds. Rueschenberg was the points leader entering Port City Raceway on Saturday, where he had to come from the B-Main to qualify for the feature. A B-Main win translated to 21st in the feature which meant he would need a strong performance on Sunday at Creek County to close out the title.

Starting tenth in Sunday’s feature, Rueschenberg charged to fourth. The performance earned him the 2021 Sooner 600 Week crown in A-Class. Rueschenberg also competes full-time in the National Open Wheel Restricted division where he scored four top-five finishes during the week including a second place run in Sunday’s finale at Creek County.

The successful five nights of competition advanced Rueschenberg to second in the national championship in both Restricted and A-Class with the next event for the NOW600 series to come on July 13 and 14. Rueschenberg will now turn his attention towards a move to the Outlaw 600 ranks, aiming for the High Banks Hustle at Southern Illinois Raceway on June 17-19. That will be followed by competing in the Donnie Ray Crawford Memorial at Port City, then competing at Sweet Springs in Missouri for the Small Town Throwdown during the first weekend in July.