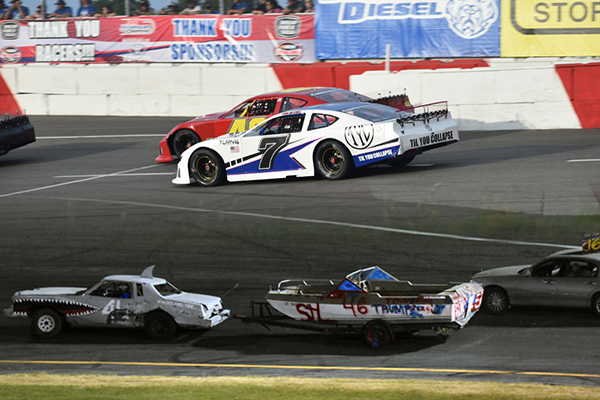 Advanced tickets are available online at www.AllAmericanSpeedway.com with state, local, and CDC guidelines enforced at the event. Masks are required for attendees and all attendees including children must have a ticket selected in advance online. Tickets will be priced at $20.00 except children five and under who are free. Parking is controlled by @the Grounds and race fans must park at the main entrance lot off Junction Blvd.

Grandstands open at 5pm with heat races starting at 5:15pm. Opening ceremonies will take place at 6pm with features to follow.

Alan Bridgman used his “shark car” to win the first $1,000 to win Trailer Bash of the year on May 1. The 15-lap event presented by Riebes Auto Parts has just a few rules but lots of excitement. The winning driver must both finish first and have their trailer still attached to the car. Drivers can collide with other trailers to knock trailers off, but no car-to-car contact is allowed. Trailers must carry a boat or be a camping-type trailer. Full entry form and rules are available on the speedway website.

The NASCAR competition is heating up as Roseville heads for the summer stretch. Granite Bay’s John Moore has won four Berco Redwood Late Model main events and looks to add two more wins during a twin 35-lap night of action. He leads Fort Bragg’s Aidan Daniels by 18 points in the standings with Auburn’s Thomas Martin, Loomis’ Michael Mitchell, and Galt’s Matt Wendt rounding out the top-five.

Roseville’s Ray Molina has moved to the top of the F4 championship as he works on a title defense of his own. His advantage over Brandon Frantz stands at 25 points. Fernley, NV’s Dennis Crook, Roseville’s Matthew Fuhs, and Vic Theberge of Citrus Heights are the top-five in pursuit of Molina in Saturday’s 25-lap race.

Kenna Mitchell of Loomis enjoys a four-point lead in the Junior Late Models ahead of Fort Bragg drivers Lane Anderson and Trey Daniels, who each have a win this season. In Mini Cup/Bandolero, Colton Nelson of Auburn has put six points between himself and 2020 champion Bella Thomsen in the championship with Anthony Bean running as the leading rookie driver in third.

Additional information on fan attendance is available at www.AllAmericanSpeedway.com Competitors will participate in practice activities on Friday before racing on Saturday. Pit gates open Saturday at 11am with practices beginning at 12:30pm. Qualifying takes place at 3:15pm before grandstands open at 5pm. Heat races for Modifieds, Super Stocks, and F4s are scheduled for 5:15pm. Opening ceremonies will take place at 6pm with features to follow. The Riebes Auto Parts Trailer Bash closes the show.

Competitors will be limited to the competitor seating areas in turn two for distancing and safety from the general public in the grandstands. Fans who are unable to secure one of the limited tickets can also purchase a Pay Per View subscription at www.AllAmericanSpeedway.TV