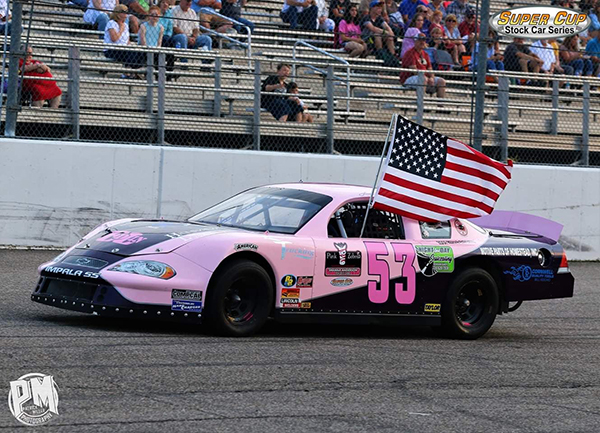 SHENANDOAH, VIRGINIA (May 27, 2021) – The second running of the Veterans Classic for the Super Cup Stock Car Series sees the powerful machines returning to Shenandoah Speedway for twin features on the 3/8ths mile oval. The event on June 5 raises money for veterans charities while memorializing those lost on D-Day. The state of Virginia suffered the most losses of any state on D-Day, June 6 1944. Photo by Patrick Miller

Bandoleros, Late Models and Sportsman, Vintage Racers, UCARS, and Legends will also be in action during the busy evening at the picturesque speedway. The event opens with opening ceremonies at 6:30pm followed by a meet and greet with the drivers and a frisbee toss by the Super Cup drivers. The fan who grabs the frisbee of the second race’s winning driver will get to be a part of the victory lane celebration.

Drivers will also walk through the grandstands collecting donations for veterans throughout the race.

Tickets are priced at $10 for adults while kids are $5. Veterans, Active Military, Wounded Warriors, and First Responders will be admitted free of charge.

On track activities open on Friday with pit gates swinging open at noon and on track practice from 2pm until dark. Friday’s practice will also serve as the media day for the event with all media invited to attend. Pit passes are $30. On Saturday, pit gates open at 11am with the first Super Cup practice at 2pm. Qualifying begins at 5:10pm with opening ceremonies to follow.

Race fans in the region have the opportunity to see equipment used in the higher levels of NASCAR, Pro Cup, and ARCA competition in the intimate setting of Shenandoah Speedway underneath the Shenandoah National Park.