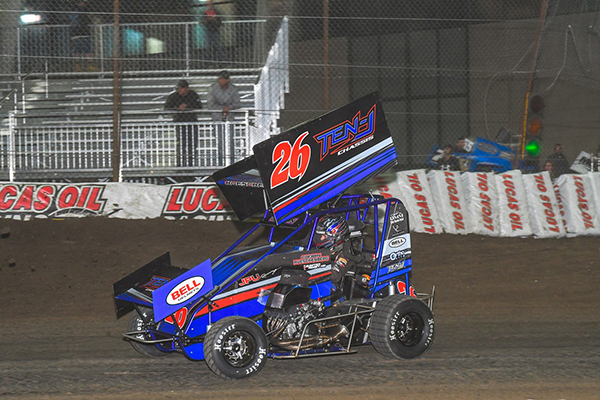 MESA, ARIZONA (December 24, 2020) – Corbin Rueschenberg will begin an ambitious 2021 campaign with his second visit to the Tulsa Shootout, competing in A-Class, Stock Non-Wing, and Restricted A-Class in the 36th running from December 29-January 2. Rueschenberg has had a tremendous fall across the west coast in both Micro Sprints and Karts, accumulating five victories. The success came with the help of Steve and Justyne Hamblin at MJM Motorsports and Ryan Ruth of Ruthless Karting.

Rueschenberg embarked on his 2020 inaugural full-time campaign in Micros after a successful Quarter Midget career. His career includes three QMA Grand National championships, three event wins on the USAC national Quarter Midget trail, four wins at the Winter Nationals in Las Vegas, and five track championships. The driver known as the “Bandit” competes in Lacrosse and Wrestling when not driving in his Ten-J Chassis Micro Sprints.

His recent stride included a win at Phoenix Kart Association in LO206 JR1 on October 9th. He added a third-place finish during Delta Speedway’s Turkey Bowl in Restricted Micros. The following weekend at Lemoore Raceway’s Cal Cup, Rueschenberg won the Friday night main event for Restricted and finished second in that night’s Stock feature. He finished second in Saturday’s Restricted finale as well.

Rueschenberg scored a Restricted win on November 14th at Adobe Mountain Speedway and also debuted in the NOW600 Cactus Region Non-Wing with a sixth-place finish. A win, a second place, and a fourth place made up his weekend at the Desert Thunder Nationals at Central Arizona Speedway back in the Restricted class. His most recent win came at Adobe Mountain Speedway on December 12th, followed by another sixth-place effort in the Non-Wing competition later that night.

“We’ve been following Corbin since he’s been eight years old. We are proud to form a partnership with him directly and JPU Racing for the 2021 season,” Butch Lamb of Radical Race Gear said.

“We’re looking forward to partnering with Corbin and hope that supporting open wheel racing will attract the teams to look to Arizona’s Best Garage Door as their first choice,” Travis Tentham said on behalf of the company.

Activities get underway in Tulsa with practice on December 29th, before racing begins on December 30th. The main events will take place on January 2nd. Every lap of racing at the Tulsa Shootout will be streamed live to FloRacing.com Fans can also follow Corbin Rueschenberg on social media including on Facebook at www.CorbinRueschenberg.com