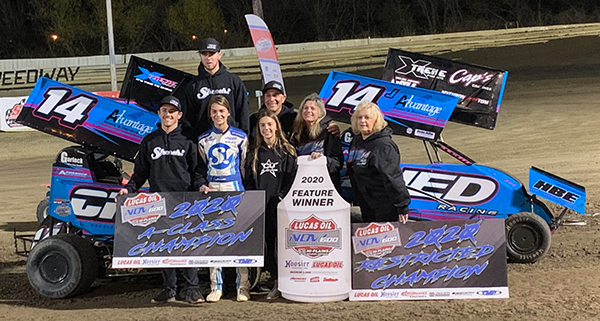 CLOVIS, CALIFORNIA (November 9, 2020) – 14-year-old Jade Avedisian completed her mission towards an unprecedented feat, as the Clovis, Calif. teenager won both the National Open Wheel A-Class and Restricted national championships. Avedisian closed the deal on Saturday and Sunday at the Fall Fling at Creek County Speedway in Sapulpa, OK. She became the first pilot to win both division’s championships in the same season and will end 2020 ranked fourth all-time in victories in the series.

Despite spending much of the 2020 season competing over 1,500 miles from home, Avedisian accumulated a career’s worth of accomplishments this season. Avedisian’s victory at the Tulsa Shootout in January started the season in the right direction before a win at Port City Raceway in March in Restricted. She added four more NOW600 wins before the end of May with a total of 12 podiums before the Sooner 600 Week began in June.

A five-night grind saw Avedisian score three wins and a perfect ten-for-ten in top-fives, including an A-Class triumph at Red Dirt Raceway. She swept the Sooner 600 Week championships and had both National Open Wheel championships well within reach.

Her break out season hit its crescendo a few weeks later at Sweet Springs Motorsports Complex in Missouri. Climbing into the Super 600 division for just the second weekend of her career, Avedisian won the $20,000 to win John Hinck Championship.

The second half of the season saw Avedisian step up to the plate across numerous different series on both coasts. She earned a pair of runner-up finishes at Millbridge Speedway in North Carolina in August before a second-place finish at Delta Speedway in Stockton, Calif. in Super 600 competition in October.

She returned to National Open Wheel action at Caney Valley Speedway in October with a trio of third place finishes across her four starts that weekend. After narrowly missing the feature at the KKM Giveback Classic at Millbridge, Avedisian traveled to Creek County for the NOW600 finale.

Saturday’s events included the championship clinching fourth place finish in A-Class before finishing second in the Restricted feature. With A-Class sewed up, Avedisian focused solely on Restricted on Sunday with a third-place finish to wrap up an outstanding 2020 season. Avedisian participated in nearly 60 events across the county, tallying ten victories and 27 podiums. She led the NOW600 with 19 top-fives total within the series.

Jade Avedisian and Aved Racing has already begun preparations for the Tulsa Shootout as well. Learn more about Jade at www.JadeAvedisian.com