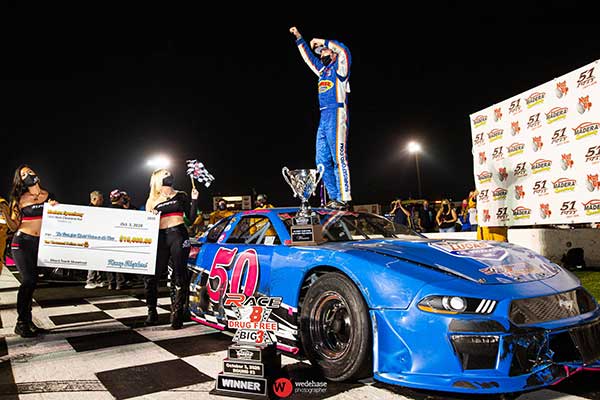 Dylan Zampa of Napa led the first lap of competition from the outside pole in a side-by-side race with Huddleston. They remained side-by-side until a caution on lap five. On the restart, Zampa charged past Huddleston on the outside with Shepherd following Zampa to take second.

Ninth-starting Jeremy Doss, the defending Nut Up Short Track Shootout winner, was up to fourth by lap 21 as he battled with Carlos Vieira. The racing line moved higher and higher on the entry to turn one throughout this extended green flag run.

Shepherd closed on Zampa for the lead with the duo making contact into turn one, sending Zampa spinning for a caution on lap 23. Both Shepherd and Zampa had to restart at the back, before Zampa eventually succumbed to mechanical issues. Huddleston assumed the top position and used the outside on the restart while Mike Doss challenged Vieira for second.

A caution flew on lap 46 when 2019 Nut Up Pro Late Model champion Austin Herzog slowed on the front stretch. Huddleston picked the inside on the restart which allowed Jeremy Doss to go around the outside to take the lead on lap 47.

2018 Short Track Shootout winner Logan Zampa spun from the fifth position along with Dean Thompson for a caution on lap 52. Shepherd quickly moved through the pack, emerging in sixth in just 40 laps since being sent to the rear.

Mike Doss and Huddleston staged an exciting battle for second until the lap 100 break, with Doss narrowly edging Huddleston for the position. Jeremy Doss, Mike Doss, Huddleston, Vieira, and Ryan Philpott were the top-five coming out of the Mission Racing Style Tortilla Chips halfway show for MAVTV. For the final 50 laps, Shepherd continued his run towards the front. Former MAVTV Pro Late Model winners Racin Vernon and Blaine Rocha crashed on the backstretch to force a red flag on lap 123. Both were uninjured.

Logan Zampa was involved in another spin on the front stretch on lap 123 as well. Doss, Huddleston, and Vieira put on a frantic battle for the lead on the ensuing restart, with numerous crossover moves. The race boiled over when Vieira went three-wide on the inside into turn one. Vieira and Huddleston made contact, sending Huddleston into the left rear of Doss. Vieira slid past them both before tangling with Doss and crashing into the backstretch wall.

Vieira’s night ended while Doss was relegated to the back of the field for his involvement. Huddleston assumed the lead while Shepherd wrestled side-by-side with 26th starting Tyler Herzog for numerous laps for second. Herzog eventually fell out of the event with a failure on the left front, setting up a seven-lap sprint for the $10,000 to win.

Huddleston and Shepherd exchanged blows, with Shepherd taking the lead on lap 147 on the exit of turn four. Huddleston muscled his way back to the front, leading lap 149 across the stripe and darting ahead to a .296 victory. Shepherd finished with a $5,000 second over Ross Strmiska for a $2,500 third place run. Jeremy Doss worked his way back to fourth ahead of his father Mike, with Jeremy clinching the $5,000 to win Race 2B Drug Free Big3 championship in the process as well.

Jake Bollman led from the pole position with Erickson working the inside to take second from Brown by lap two. Bollman led Erickson, Brown, Ethan Nascimento, and Kercie Jung into the lap 40 break for adjustments and MAVTV interviews after a fast-paced opening segment.

Erickson expected a shot at the lead from the outside line during his interview, and took advantage when Bollman placed him there on the restart. The 14-year-old from Phoenix drove ahead of Bollman to lead lap 41. The caution flew on the following lap for Colorado’s Holly Clark spun out on the backstretch.

Jung and fellow Bakersfield driver Kabe McClenny battled for fifth before Jung took over on lap 46. Brown used the inside to win a side-by-side battle with Bollman for second on lap 49.

Brown moved in on Erickson, nosing inside on the front stretch to lead lap 57. Brown led the final 14 laps for the triumph over Erickson, Bollman, Nascimento, and Jung.

Jeffrey Erickson continued his unbeaten season in the Bandoleros, winning round eight in the 30-lap feature. Bakersfield’s Caden Cordova finished second with Linden’s Wyatt Sansom in third. Evan Laires won his first Mini Cup feature at Madera in the race within a race, with points leader Rebecca Dubie of Tracy finishing second and wrapping up the 2020 Mini Cup championship in the process.