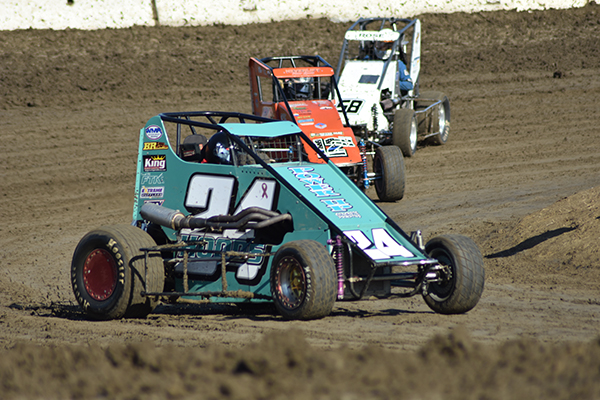 Western Midget Racing is also scheduled to conclude its season on October 24th at Petaluma Speedway, joining the USAC and BCRA Midgets for another open wheel night of racing on the Adobe Clay surface. The 2020 season for WMR will not crown a points champion due to the Coronavirus pandemic stifling the early season schedule. WMR will be on the card for the recently rescheduled 60th Johnny Key Classic on October 17th at Ocean Speedway in Watsonville as well.

This Saturday at Petaluma, pit gates open at noon with hot laps beginning at 5:00 pm. Tarps are required in the pits under each car at Petaluma Speedway to capture fluids. Racing begins at 6:00 p.m. and can be streamed live on FloRacing.com

Fresno’s David Prickett drove the #22q Henson General Engineering Spike/EcoTec to victory in the series’ debut at Petaluma on July 18th. He was followed by Tyler Slay of Watsonville, who won the Ocean Speedway round for WMR on August 7th in a duel with Prickett. Watsonville’s Evan Bonnema finished third followed by three-time USAC Western Midget winner Tyler Dolacki of Fresno, and Central Point, Oregon driver Theron Smith.

Slay is only the third repeat winner in series history, driving the Slayer Racing Engines Spike/Ecotec. The ten-year racing veteran is the 2018 USAC Speed2 Western States Dirt champion before coming over to WMR. Slay and Bonnema will be joined in the Chris Bray-owned stables by Washington’s Stephen Blankenship. The Tenino, Wash. driver previous raced asphalt Late Models and is dipping his toes into dirt midgets on Saturday.

Prickett will be joined by teammates Sean Quinn of Clovis and David Raquenio of Fresno. Quinn, driving in support of Racing for Veterans, is returning to WMR after competing in the Ravesaver Nationals at Eagle Raceway last weekend. The event attracted more than 100 305-powered Sprint Cars to the Nebraska oval.

For more information about Western Midget Racing, visit them online at www.WesternMidgetRacing.com