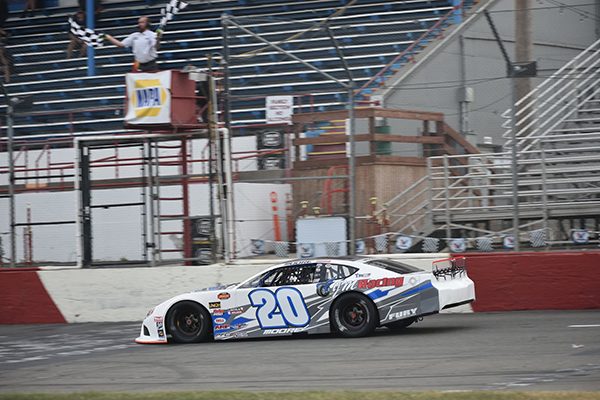 Moore started fifth in the first twin after Reno’s Randy Hedrick again set fast time, with the Reno driver qualifying within one one-thousandth of his fast-time from September 12th. Three-wide battling at the start of the race gave the lead to Yorba Linda’s Dylan Garner. Shannon Mansch of Roseville then took over on lap two. After a caution for Kylie Daniels spinning on the front stretch, the intensity level continued. Mitchell and Mansch made contact on the front stretch for second, with Mitchell cutting down a right rear tire for another caution.

Garner assumed the lead but on lap eight, Moore went around the outside to take the lead. Hedrick took over second by lap 18 while Galt’s Matt Wendt moved past both Mitchell and Tyler Caturegli of Cloverdale to move up to fourth. Moore, Hedrick, Garner, Wendt were the top-five finishers as the checkered flag flew.

In the second 35-lap race, Moore was relegated to starting eighth after the NASCAR inversion. Mitchell led from the pole and Moore immediately pounced up to fourth by lap three. Moore then overhauled Garner for third on lap eight. Mitchell, Moore, and Wendt lined up as the top-three on lap 17 in a close formation. Moore took over the lead on the following lap with Wendt taking second a few laps later. Moore was never challenged as he dashed to victory over Wendt, Hedrick, Mitchell, and Garner as the top-five finishers.

Derek Thorn of Bakersfield won the SPEARS SRL Southwest Tour JM Environmental 127 for his 46th career win in the series. The victory also moves Thorn closer to his fifth series title and paid $5,000 to win. Thorn took the lead away from Cole Moore and never relinquished it throughout a competition caution and a scheduled break for adjustments and fuel on lap 76.

Windsor’s Sammy Nuno went around the outside to lead the opening while Philpot had advanced to second by lap five. Philpot nosed inside Nuno on the front stretch to lead lap ten. Sierra Furia had an exciting battle with Lincoln’s Mike Gorham for third, before Furia took over the position on lap 12. Furia then worked her way past Nuno for second on lap 23 but was unable to close in on Philpot. Philpot extended his championship lead with Furia, Nuno, Josh Blackwood and Gorham rounding out the top-five.

Fort Bragg’s 16-year-old Aidan Daniels moved closer to his first Jr. Late Model championship as he claimed his fourth triumph of the year. Daniels started fifth while Lane Anderson led the first lap. Daniels made passing maneuvers on the outside to quickly move into second. Daniels then went inside Anderson to take the lead on lap nine.

Anderson anchored a tightly wound pack for second until he spun on lap 26 with four laps to go. A series of incidents over the final four laps allowed Daniels to clinch victory, while Anderson held off Stockton’s Joey Stearns for third. Incoming second in points Kenna Mitchell of Loomis tangled with Trey Daniels coming to the finish with the top-two drivers in the 2019 Bandolero championship each suffering heavy damage.

A season-high 14 Super Stocks competed for 30-laps, but 2019 champion Andrew Peeler of Sacramento managed to win his fourth consecutive feature of the year. Roseville’s Andrew Kemp spun for a caution on lap two. Peeler used the restart to go around the outside of Phil Wilkins of Roseville, leading lap four in the process.

Roseville’s Jill Schmidt battled with Wilkins for second before multiple instances of contact cut down the left rear of Wilkins, causing him to slow for another caution. Former Bomber champion Blake Disomma spun on lap 15 in turn two for the next caution and restarted from the rear. Kemp charged back through the field up to fourth by lap 17 on the restart. Schmidt took over fourth from Kemp on lap 21, then battled with Tim Walters. Schmidt and Walters tangled on lap 22 relegating them both to the rear of the field.

Peeler held off Roseville’s Roy Smith over the final restarts to take the victory with Loren Powers, Jr., Kemp, and Lodi’s Brandon Diede the top-five finishers.

Roseville’s Ray Molina won his fifth F4 feature of the year in unlikely circumstances after the breakout rule came into play on the 24th lap of the feature. Jerry Nunes jumped out to the lead from the pole position then tangled with Vic Theberge of Citrus Heights. Nevada’s Rich Innis slid through the contact to lead lap two. Theberge then collided with Dennis Crook to bring out a caution on lap four.

Molina went around Innis on the restart for the lead. The caution came out for Crook’s rear bumper resting at the top of turn two. On the restart, Fuhs made a bid to advance up to second on the outside.

The event slowed for a red flag involving Christian Sanchez hitting the front stretch wall. He was uninjured. Fuhs went outside Molina to take the lead on the restart. Fuhs and Molina ran nose-to-tail for the final 10 laps. Coming to the white flag, Fuhs ran below the 16.5 second breakout rule. He failed to yield the lead to Molina, with Molina named the winner over Fuhs, Innis, Nunes, and Crook.

Auburn’s Colton Nelson won his second straight Mini Cup main event, grabbing a hotly contested win in the 20-lap feature. Molly Laires led the opening lap with twin brother Evan in hot pursuit. Evan used the inside exiting turn two to take the lead on lap six. Nelson spun in turn four for a caution. Nelson then used a restart to rocket past the pack to lead lap 12. Nelson paced Evan Laires and Bella Thomsen across the finish line in a close finish.

The championship night at All American Speedway will be October 10th, streamed live to www.AllAmericanSpeedway.TV

For more information, visit www.AllAmericanSpeedway.com The 2020 season at All American Speedway could not be possible without Sinister Diesel, Jaws Gear & Axle, JM Environmental, and Riebes Auto Parts.