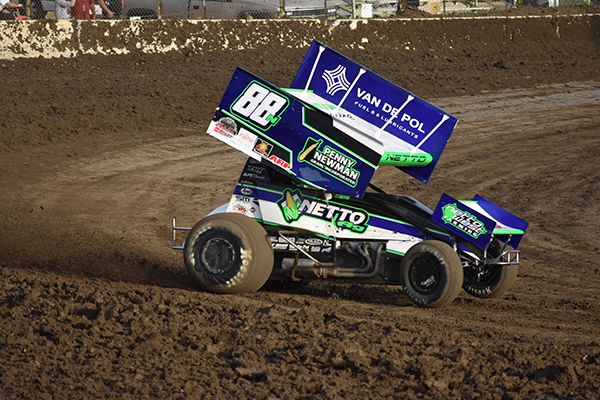 WATSONVILLE, CALIF. (September 18, 2020) – 2019 King of the West champion DJ Netto drove to his second Ocean Sprints presented by Taco Bravo victory of the season on Friday, taking the 30-lap feature over a 22-car field in Watsonville, Calif. The victory makes Netto only the second repeat winner during the eight rounds at the Ocean Speedway. Photo by Joe Shivak

Washington’s JJ Hickle led time trials before Netto won the dash to earn the pole position for the feature. Points leader Bud Kaeding of San Jose led the opening lap on the outside of Netto. Netto then cut underneath Kaeding into turn three on the following lap to lead lap two.

The leaders approached lapped traffic by just the seventh lap of the race. The first caution fell on lap nine when Chase Johnson of Penngrove slowed with a problem on the right rear of his machine. He failed to return to the event.

Hickle and Redding’s Chase Majdic battled for fourth position behind the lead trio of Netto, Kaeding, and Hanford’s Mitchell Faccinto. 2019 USAC West Coast 360 champion Tristan Guardino stopped from a potential top-ten finish for a caution on lap 15 in car #15. Redding’s Max Mittry had advanced from 16th starting position to eighth by that stage of the event.

Netto never faced much scrutiny over the second half of the feature, keeping a lapped car or two between himself and Kaeding the rest of the way. Netto topped Kaeding by 2.329 seconds at the stripe followed by Faccinto, Majdic, and Hickle. The Ocean Sprints return on October 17th for the 60th running of the Johnny Key Classic.

The prelude to next weekend’s Pettit Shootout attracted great racing across the IMCA Modifieds, IMCA Sport Mods, and Hobby Stocks.

In the IMCA Modifieds, Bobby Hogge IV of Salinas led the final 14 laps for the win. 2020 West Coast Stock Car Hall of Fame inductee Jim Pettit II led lap one around the outside of Tim Balding. The Prunedale drivers battled for the lead with Balding taking over on lap three.

Pettit fell backwards to third on the outside, then spun for a caution on lap five. While spinning in turn three, he was hit hard by Robert Marsh of Salinas. Pettit managed to continue but Marsh was out of the race. Hogge used the restart to sweep past Balding for the lead on lap seven. Hogge, Balding, Oakley’s Troy Fougler, 2019 track champion Cody Burke, and Austin Burke were the top-five finishers.

Watsonville’s Adriane Frost took sole possession of the IMCA Sport Mod points lead with her first win of 2020 in the 20-lap event. Max Baggett of Prunedale led the first two circuits before Jim DiGiovanni grabbed hold of the lead. Baggett fell to fourth while DiGiovanni paced Frost and Atwater’s Tanner Thomas in a close duel for the win.

Frost tried low but eventually went upstairs. She went outside DiGiovanni on the backstretch and cleared him to lead lap 16. Frost then led the leaders through lapped traffic for the win. Thomas finished second followed by DiGiovanni, Santa Maria’s Markus Frazier, and Kelly Campanile of San Ramon.

Rob Gallaher of San Jose won his first Hobby Stock feature of the year by leading all 20-laps. The win was anything but easy, however. After a caution involving Ken Winland of Santa Clara, things tightened up at the front. Gallaher anchored a race long, two-by-two battle, which included points leader Joe Gallaher, Watsonville’s Jerry Skelton, and second in points Steve Remde – also of Watsonville.

The foursome finally spread out within the final five laps of the contest, with Gallaher topping Skelton, Joe Gallaher, Remde, and Sam Kennedy at the finish.

Ryan McClelland of Scotts Valley went for four in the Four Banger division, as the points leader drove from the rear of the field to win his fourth feature of the year. McClelland started tenth in the 15 lapper while outside pole sitter Nate Hart of Aptos led the way early. 2019 Police-In-Pursuit champion Roy Iller battled with Hart, including a moment when Iller t-boned Hart in turn four. Hart saved it and kept the lead.

McClelland looked inside Hart to take the lead on the backstretch on lap ten. Hart, Iller, Tony Gullo, and 2019 champion Nicole Beardsley followed McClelland at the finish.