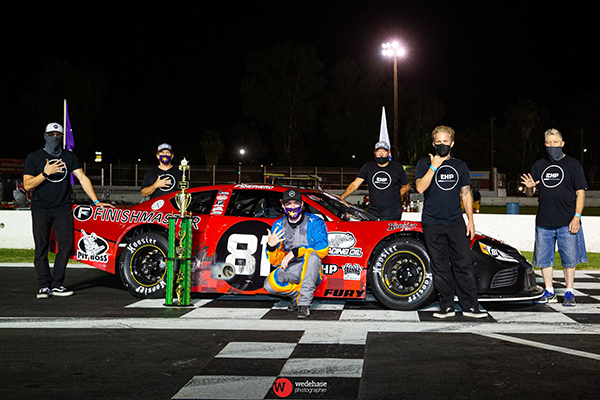 Blaine Rocha led the opening circuit of the 80-lap race from the outside pole before the first caution flew on lap three. Wyoming’s Lance Elliott spun in turn one and suffered race-ending front end damage.

2019 Madera Late Model champion Jason Aguirre spun in turn four for the next caution. Shepherd looked inside Rocha for the lead on several occasions after that restart, while Dylan Zampa of Napa battled with 2019 Nut Up Pro Late Model champion Austin Herzog of Clovis for fourth.

Rocha picked the outside on the restart and ran side-by-side with Shepherd for numerous laps. Shepherd then tucked in on the outside behind Rocha for a pair of laps, before diving inside one more. Shepherd’s resilience paid off when he cleared Rocha on lap 25 for the lead.

Emerging from the break for adjustments and MAVTV interviews, Shepherd charged ahead while Rocha fought off a challenge from Zampa. Zampa then battled with Cook for third throughout the closing stages of the race. Shepherd won his 13th televised Late Model race at Madera and extended his points lead, leading Rocha across the finish by 2.812 seconds. Cook, Zampa, and Ryan Philpott of Livermore rounded out the top-five.

Bradley Erickson of Phoenix moved closer to the championship in the 51FIFTY Jr. Late Model Series with his fourth win of the year. Ukiah’s Cole Brown paced time trials with a new track record at 14.937 seconds, lining up alongside Erickson on the third row for the 70-lap affair.

Jake Bollman led the way while outside pole sitter Holly Clark of Colorado fell back to fifth. The first caution on lap three saw both Hailey Liles and Washington’s Kasey Kleyn suffer damage in turn four. On the restart, Clark battled fellow Colorado driver Cassidy Hinds. The battle ended with a significant crash on the backstretch that sent Clark into the wall. She was uninjured but done for the night.

Brown beat Bollman to the line on the ensuing restart, with Brown penalized to the infield for a stop and go penalty. Erickson navigated through the action up to the second position, diamonding the corner as the looked for a way around Bollman. Erickson used a maneuver in turns three and four to take the lead on lap 39, leading the field into the lap 40 break.
Erickson led the rest of the race while battling continued behind him. Kale McClenny of Bakersfield went around the outside of Bollman for second with Bollman backpedaling to fourth. Brown got back on the lead lap and charged past Bollman and Kercie Jung in succession to take over fourth by lap 58.

Kabe McClenny fought a loose handling race car, opening the bottom for Brown to take third. McClenny and Hinds then collided for position to bring out the caution on lap 67.

Erickson drove ahead of Kale McClenny on the final three-lap shootout for the win, with Brown finishing third. Bollman finished fourth after a late battle with Jung, followed by Kleyn.

Jeffrey Erickson continued a perfect seven-for-seven season in the Bandolero portion of the Mini Cups vs. Bandoleros, taking the 25-lap event ahead of Bakersfield’s Caden Cordova and Joey Kennealy. Rebecca Dubie of Tracy won her sixth Mini Cup event in seven tries in 2020 as well.