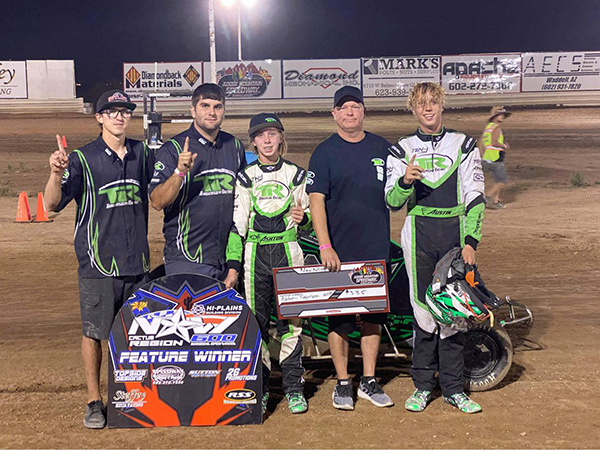 Medford, Ore. (September 14, 2020) – 14-year-old Ashton Torgerson of Medford, Ore. steered his way to victory lane for the second consecutive weekend, taking the NOW600 Cactus Region Non-Wing action at Adobe Mountain Speedway. The return to Glendale, Ariz. was a late decision for Torgerson Racing but bore fruit with the brothers finishing 1-2 in the feature.

Both drivers competed in the first heat race where Ashton Torgerson started fifth and finished third, while Austin drove from the sixth starting position to finish fifth.

Ashton lined up fifth for the 25-lap feature with Austin starting eighth. Ashton’s drive through the field, like last weekend, was methodical. He took over the lead on lap 18 while Austin followed him into second as well.

Ashton drove his #02 Ten-J Chassis to a .761 second win over the Adams Performance #88 of Austin Torgerson. Ashton will look to ride the momentum of his sixth feature win of the season heading into this weekend’s competition as well. The Crater Lake Academy students have combined for six wins in the state of Arizona this year traveling from Oregon.

Torgerson Racing thanks Ten-J Chassis and Adams Performance for their support. They can be found on Facebook, Twitter, and Instagram. An all-new TorgersonRacing.com is coming soon!