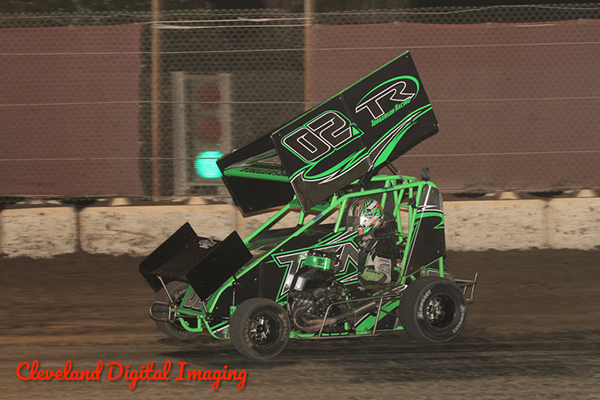 Medford, Ore. (September 8, 2020) – Torgerson Racing returned to Adobe Mountain Speedway in Glendale, Ariz. on Saturday, with 14-year-old Ashton Torgerson picking up his fifth win of the 2020 Micro Sprint season by claiming the Super 600 victory. His 17-year-old brother Austin finished third in the 25-lap feature as well.

Torgerson Racing has competed at the new Adobe Mountain track in January and again during the Salute to Indy in May. The Labor Day weekend event marked a return to the desert with 111 degree temperatures for the Crater Lake Academy students. Driving the #02 Ten-J Chassis, Ashton started his heat race from the second position but quickly took the lead on the way to the win. Austin Torgerson drove the #88 powered by Adams Performance to a third-place finish in his heat race, after starting fifth.

Ashton Torgerson lined up third in the 25-lap feature while Austin lined up on the inside of row four for the main event. Ashton Torgerson assumed the top position by lap 12 then charged to his fastest lap of the feature on lap 15. The 11.683 second lap was also the fastest lap by any car in the event. Torgerson drove ahead to a near half lap advantage, winning by 5.817 seconds at the stripe. Austin Torgerson moved forward methodically, grabbing third by lap 13. He was tracking down second place but ran out of time in the fast-paced race.

On Sunday, the team returned to Adobe Mountain for the second night of action. Ashton Torgerson finished third in his heat race, then lined up third in the main event. An opening lap incident relegated him to the rear of the field. He charged forward and eventually challenged for lead before an incident knocked him back to the seventh position at the finish.

Austin Torgerson was also on the move on Sunday, driving from eleventh starting position in the feature to a solid second place effort.

Torgerson Racing plans to compete this weekend at Dixon Speedway before returning to Adobe Mountain on September 19th.

Torgerson Racing thanks Ten-J Chassis and Adams Performance for their support. They can be found on Facebook, Twitter, and Instagram. An all-new TorgersonRacing.com is coming soon!