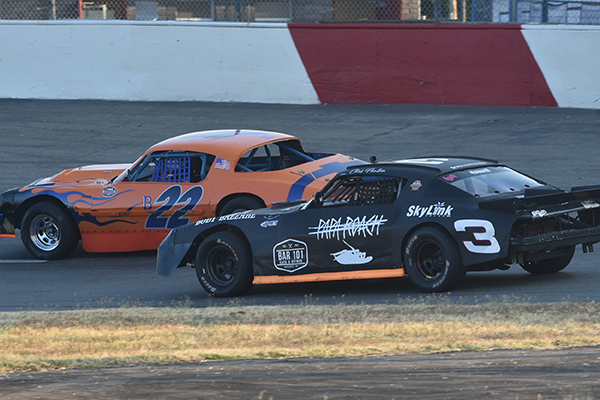 Race fans can purchase their live viewing pass for the seven main event show for $19.99 in high definition. Events get underway at 5:00 pm Pacific. The pass is also good for 30 days after the event to view it on demand. COVID-19 Protocols will be strictly enforced this weekend for this competitor-only event.

Cole Moore has had the hot hand on the first two nights of competition for the Late Model division. The two-time winner in 2019 has won three out of the four races so far, launching the Granite Bay driver to a 28-point advantage in the championship standings. Galt’s Matt Wendt, Roseville’s Shannon Mansch, Loomis’ Chris Scribner, and Fort Bragg’s Kylie Daniels round out the top-five in the standings. The twin main events pay points for both the track championship and the state and national NASCAR titles as well.

A rare Super Stock doubleheader will see the NASCAR Div. III racers battle over a pair of 25-lap races. Roseville’s Jill Schmidt will try to preserve her nine-point advantage over 2019 track champion Andrew Peeler. Tim Walters, Phil Wilkins, and Tim Williams make up the rest of the top-five.

2019 F4 champion Ray Molina of Roseville leads Nevada’s Rich Innis by just five points in their title battle, while the Jaws Gear & Axle Limited Modifieds have been swept by Sacramento’s Jason Philpot in 2020. 2019 Jr. Late Model runner-up Aidan Daniels and 2019 Bandolero champion Kenna Mitchell are tied in the Junior standings, with Fort Bragg’s Lane Anderson just three points out of first as well. The youngest drivers in the Mini Cups/Bandos will have the weekend off in preparation for a big return on Sept. 12.

All American Speedway wants to thank @the Grounds for their support along with partners such as Sinister Diesel, Riebes Auto Parts, Jaws Gear & Axle, and JM Environmental for making this season possible. Companies interested in supporting these events can contact All American Speedway at (916) 786-2025. Without competitor support and local community partners, these events would not take place.

Drivers will be required to fill out a COVID-19 waiver and questionnaire. All forms are available at www.AllAmericanSpeedway.com Friday night practice will see gates open at 4:00 pm with the track hot from 5:00 pm to 8:15 pm. On Saturday, pit gates open at 11:30 am with practice beginning at 1:00 pm. Opening ceremonies will be at 5:00 pm with main events to follow.