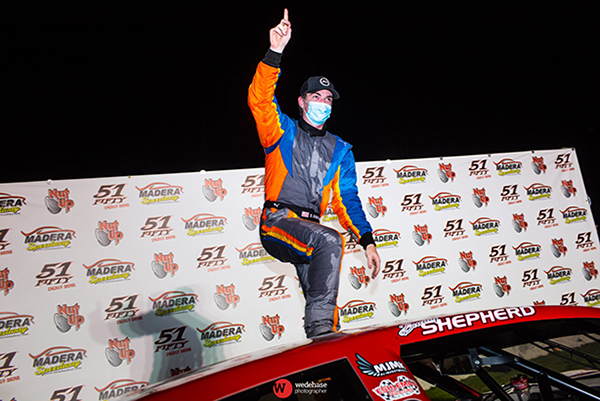 Shepherd set fast-time in time trials then drew the pole over the 20-car field on hand. Outside polesitter Tyler Herzog, the 2019 Madera Late Model non-televised champion, fell back to third. The first caution flew on lap two followed by Shepherd picking the outside for his first of many restarts against Strmiska. Herzog drifted back to sixth on this restart.

Pete Soto lost fluid from his radiator to bring out a caution on lap 22 costing the rookie sixth place. Dylan Zampa used the restart to drive around Ryan Philpott to take third. Iest had an incident with Tim Skoglund that brought out the caution on lap 35 in turn three. Austin Herzog stopped on the front stretch with a mechanical failure on the restart, ending the evening for the 2019 Nut Up Pro Late Model champion.

Coming out of the lap 50 break for adjustments and MAVTV interviews, it was Shepherd continuing to lead Strmiska, Philpott, Dylan and Logan Zampa. Dylan Zampa passed Strmiska for second while Cooper battled with Logan Zampa for sixth. Strmiska grabbed second back on lap 58 and followed that with his best lap of the main event on lap 60.

Rocha came through the field despite significant earlier damage, challenging Philpott for fourth several times over the closing stages of the race. Shepherd won by nearly two seconds over Strmiska, Dylan Zampa, Philpott, and Logan Zampa.

Bradley Erickson claimed his third fast-time of the season and his second consecutive win in the 51FIFTY Jr. Late Models. The 14-year-old from Phoenix, Ariz. started third in the 70-lap feature. Washington’s Kasey Kleyn had a transmission failure coming to the green flag which necessitated a delay for cleanup. Cole Brown led lap one from the outside of polesitter Jake Bollman. Bollman edged forward to lead lap three, however, before Brown took the top spot back on lap five. Bollman then took over on lap seven and cleared Brown.

Bakersfield drivers Seth Wise and Kercie Jung collided for fifth, sending Jung spinning to require a caution on lap 16. Bollman restarted inside of Erickson on the ensuing restart, allowing Erickson to charge past him for the lead. 2019 All American Speedway champion Brody Armtrout challenged Colorado’s Cassidy Hinds for the fifth position up until the lap 40 break.

Erickson emerged with the lead after the break for adjustments and MAVTV interviews. Kabe McClenny and Hinds tangled for a caution period on lap 43. Brown used the outside line to pass Bollman for second on the restart. Brown attempted to fend off Cody Kiemele before they had an incident in turn two which brought out the caution and relegated both to the rear of the field.

Erickson paced Bollman, Armtrout, a resurgent Jung, and Kale McClenny as the top-five finishers at the conclusion of the feature.

Jeffrey Erickson added to his Phoenix-based family’s trophy case by taking his fourth consecutive Bandolero feature as well. Erickson led the way in the 25-lap feature after a brief challenge on lap four from Wyatt Sansom. Sansom eventually spun into the infield and failed to finish. Erickson led Bakersfield rookie Caden Cordova and Nathaniel Edwards as the top-three finishers. Rebecca Dubie of Tracy won her fourth Mini Cup feature as well, taking the win over Harley Kennealy and Evan Laires in his debut appearance.

Carson City, Nev.’s Nick Halen won the 35-lap INEX Legends of the Pacific, coming from behind after an incident on lap 19. Carlee Austin led the first lap while her brother Cameron Austin was up to second by lap five. A big incident on lap six ended the evening for both Blake Borchers and Wyatt Sansom, with both cars hitting the inside wall on the front stretch.

Lakeport winner Cody Winchel took over the top position, but Halen made quick work of the field. Halen took over the lead on lap 29, then led the final six laps for victory. Winchel, Bakersfield’s Eddie Garone, Cameron Austin, and Brendan Ruzbarsky rounded out the top-five.