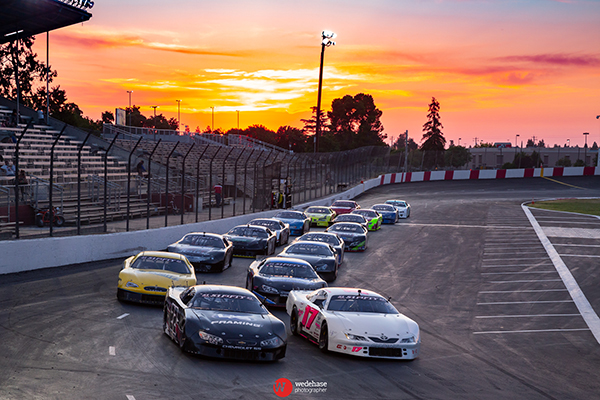 MADERA, CALIF. (August 19, 2020) – Bakersfield’s Buddy Shepherd and Phoenix’s Bradley Erickson lead the MAVTV-televised stock car action at Madera Speedway, with both the Nut Up Pro Late Model Series and 51FIFTY Jr. Late Models charging into round five of the nine-race series. Mini Cups vs. Bandoleros and Legends of the Pacific are also scheduled for Saturday’s loaded card of racing.

Grandstands remain closed due to COVID-19 industry guidance, but Madera Speedway, Mission Foods, and Nut Up Industries will provide a free live stream. Race fans can tune in to Short Track TV on YouTube at 6pm Pacific for the coverage at https://youtu.be/FqPdh8CreYo

14-year-old Bradley Erickson has used a trio of fast-times and back-to-back wins to launch to a 33-point advantage in the 51FIFTY Jr. Late Model Series. Erickson’s success story in 2020 includes 157 laps led and guidance from TJ Clark, father of the late NASCAR XFINITY prospect Spencer Clark.

Bakersfield’s Seth Wise entered 2020 with the hot hand, winning both the 2019 season finale and this year’s first two races. A crash into the front stretch wall ended his run on August 8th, bouncing Wise to a 33-point deficit behind Erickson.

The series has tightened up considerably behind Wise, with Ukiah’s Cole Brown running third in the standings at just 48 points out of the lead. Bakersfield’s Kercie Jung is just five points adrift of Brown, overcoming a spin in the first half of the latest race to finish fourth. Jake Bollman used a career-best second place finish to advance to fifth in the standings as well.

The 51FIFTY Jr. Late Model action will again be a 70-lap contest, with a 40-lap opening segment followed by a 30-lap sprint to the finish.

Bakersfield’s Buddy Shepherd won qualifying then led all 80-laps to win the fourth event for the 2020 Nut Up Pro Late Models. The two-time series champion enjoys a 35-point advantage with 177 laps led across his three victories this year.

A consistent campaign from the Nut Up-sponsored No.90 of Ross Strmiska has pushed the veteran driver to second in the standings. 2007 Altamont Raceway Park champion Ryan Philpott of Livermore continues to claw towards his first MAVTV-televised stock car win, using a best finish of third this year to find himself third in the championship. Blaine Rocha opened 2020 with back-to-back top-fives and is yet to finish outside the top-ten, giving him possession of fourth in the standings ahead of Napa brothers Dylan and Logan Zampa

Shelden Cooper has had a standout season with a career-best sixth place finish in the most recent event. The finish gives him a three-way tie for seventh in the championship ahead of 2019 Nut Up Pro Late Model champion Austin Herzog and 2019 51FIFTY Jr. Late Model champion Joey Iest of Madera.

Cooper will try to keep the 17-year-old Iest and 18-year-old Herzog at bay when the series returns on Saturday for their 80-lap affair. The event opens for 50-laps before a break for adjustments, the Mission Racing Style Tortilla Chips halftime show, and MAVTV interviews. The race concludes with a 30-lap finale.

Bradley Erickson’s younger brother Jeffrey leads the Bandolero standings after a perfect 4-0 start to the season. Bakersfield rookie Caden Cordova and Joey Kennealy round out the top-five. Rebecca Dubie of Tracy is also 4-0 in the Mini Cup portion of the combined main events.

The touring Legends of the Pacific saw Nick Halen of Nevada complete a Danny Sullivan-like spin and win two weeks ago. Halen will look to have a more straightforward path to victory this weekend, as the popular spec racers compete in another 35-lap contest.

Activities get underway on Friday with practice. Pit gates open at 2:30pm with the track open from 5pm to 8:45pm (high side only from 8-8:45pm).

On Saturday, pit gates open at 12pm with practice beginning at 2:00pm. Qualifying will be at 4:00pm with the Mini Cup, Bandolero, and Legends heat races to follow. Opening ceremonies and live streaming coverage will begin at approx. 5:55pm.