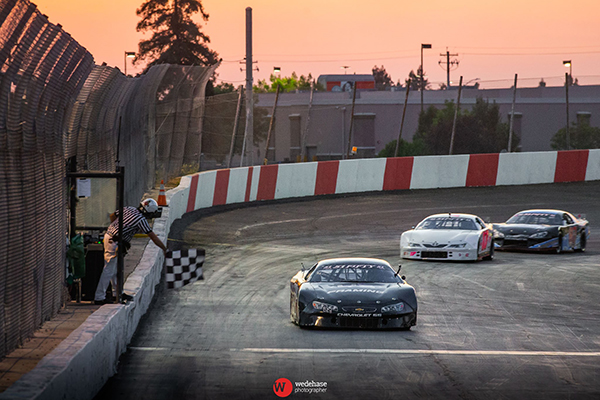 MADERA, CALIF. (August 4, 2020) – Both the Nut Up Pro Late Models and 51FIFTY Jr. Late Models continue their summer of MAVTV-televised racing with this Saturday’s fourth round of 2020 at Madera Speedway. After the season was delayed for over three months due to COVID-19, the nine-race campaign has been rescheduled for an every other week format.

Grandstands remain closed due to COVID-19 industry guidance, but Madera Speedway and Nut Up Industries will provide a free live stream. Race fans can tune in to Short Track TV on YouTube at 6pm Pacific for the coverage at https://youtu.be/9v-RlElQXmo

Phoenix, Arizona’s Bradley Erickson, age 14, has wrestled the points lead away in the 51FIFTY Jr. Late Model Series after his first career victory on July 25th. Erickson leads Bakersfield’s Seth Wise by five points in the standings. He also leads the series in laps led, with 101 laps spent at the top of the large pack of drivers ages 10-16.

“Well it’s going to take some consistency (to win the championship),” Erickson said. “Of course we don’t want to have any bad finishes or any bad qualifying efforts. We’re going to try to win as many as we can. I am really confident after this first win that we can win some more races. I’m looking forward to the rest of the season.”

Wise ranks second in the championship on the strength of two wins, while Jadan Walbridge is third in the standings just 17 points out of first. Cole Brown’s trio of top-five finishes have boosted him to fourth. Bakersfield’s Kercie Jung equaled a best finish in the series for a female with a second place run on July 25th, moving the sophomore driver up to fifth in the standings. The Jr. Late Models compete for 70-laps with a break after lap 40 for adjustments and MAVTV interviews.

Bakersfield’s Buddy Shepherd has opened his drive for his third Nut Up Pro Late Model championship with two wins and a recent runner-up finish. Shepherd trailed 2018 Short Track Shootout champion Jeremy Doss across the finish line and will look to be one spot better this go around.

Shepherd enjoys a strong 31 point lead over third-generation standout Ross Strmiska with Blaine Rocha a further 15 points back in third. 2007 Altamont Raceway Park champion Ryan Philpott is enjoying his best start to a Madera season from fourth in the points.

Matt Erickson is Madera’s winningest Late Model driver but was kept out of victory lane throughout 2019. Erickson currently ranks fifth in the championship, aiming for his first Madera win since September 22, 2018. Defending series champion Austin Herzog is seventh in the standings while 2019 51FIFTY Jr. Late Model champion Joey Iest comes into the weekend from ninth.

The Nut Up Pro Late Models will compete for 80-laps including a 50-lap opening segment before a break for TV time and car adjustments.

Jeffery Erickson has won all three Mini Cup vs. Bandolero features, and leads the Bandolero portion of the standings by 31 points over Joey Kennealy. Bakersfield’s Caden Cordova ranks third. Tracy’s Rebecca Dubie is a perfect three-for-three in the Mini Cup portion of the events and leads that championship over Harley Kennealy. 25 laps of competition are scheduled for the youngest drivers at Madera.

Legends of the Pacific were an addition to the program and always bring tight competition to the one-third mile oval. The event will pay $500 to win thanks to several series sponsors with the main event scheduled for 35-laps.

Activities get underway on Friday with practice. Pit gates open at 2:30pm with the track open from 5pm to 8:30pm (high side only from 8-8:30pm).

On Saturday, pit gates open at 11am with practice beginning at 1:00pm. Qualifying will be at 3:00pm with the Mini Cup, Bandolero, and Legends heat races to follow. Main events will begin at 5:15pm with live streaming coverage beginning at 6pm.