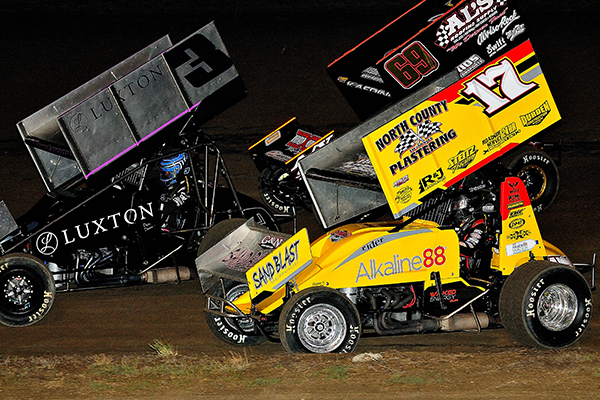 WATSONVILLE, CALIF. (August 14, 2020) – 2015 Ocean Sprints champion Justin Sanders of Aromas, Calif. became the first repeat winner through seven rounds of the series presented by Taco Bravo, winning on Friday at Ocean Speedway in Watsonville. Sanders’ win gives him momentum as he looks to defend his Johnny Key Classic title in next Saturday’s 60th running of the event.

“Two in a row is good. It helps having Tim Green here giving us pointers. Really helps us having somebody to bounce ideas off of,” Sanders said. “Tonight was definitely bottom dominant. I got my left front up on the berm and was able to rotate off of it. It would be good to get the 60th (Johnny Key Classic). I got to qualify a little better. Qualifying is huge and you got to get into the dash. Just get the comfort level up a little higher and we should be good.”

2019 USAC West Coast 360 champion Tristan Guardino of Fremont won the dash to lead the 22-car field to green. Guardino surrendered the lead, however, when he was relegated to third by officials after a jumped start. Last Friday’s polesitter Joey Ancona of Concord assumed the top spot for the next attempt, before a red flag for Adam Kaeding flipping on the backstretch.

The third try was a charm with Ancona lifting the front wheels coming to green, allowing Lincoln’s Tanner Carrick to assume the lead. Hanford’s Mitchell Faccinto then grabbed second from Ancona before a caution for points leader Bud Kaeding stopped in turn two. Kaeding rejoined the field before the restart, which Sanders used to go around the outside of Ancona for third.

Ancona pulled into the infield on lap six before a caution on lap eight for 2019 series champion JJ Ringo of Morgan Hill stopped on the frontstretch. Gilroy’s Kurt Nelson had advanced to fourth by that stage of the feature as well. The decisive move occurred one lap after the restart. Sanders looked underneath Faccinto for second entering turn three, before race leader Carrick opened up the bottom. Sanders promptly passed them both before the exit of turn four, charging to lead lap nine at the stripe.

Cautions flew on lap 13 for Kaleb Montgomery stopped in turn four and again on lap 22 when Guardino spun from fifth in turn four. Both cautions came as the leaders began to approach lapped traffic. Sanders capitalized on clear racetrack over the final eight laps, leading Carrick by five car lengths across the finish line. Faccinto, Nelson, and twelfth starting Ryan Bernal of Hollister rounded out the top-five. Kaeding advanced to sixth at the finish to preserve the points lead in the series. The Ocean Sprints presented by Taco Bravo continue on Saturday August 22nd with the 60th running of the Johnny Key Classic.

Joe Gallaher led all 20-laps to win the Hobby Stock main event. Nearly half the field was involved in separate spins on each end of the racetrack that brought out the caution on lap three. Steve Remde and Ken Winland were knocked from their battle for second in the spins. Season opener winner Terry Campion also spun in the melee.

Campion battled with Bobby Huckaby for fourth before moving forward. Campion took over third from Wally Kennedy on lap 12 and second from Jerry Skelton on lap 16. Gallaher topped Campion, Skelton, Kennedy, and Huckaby as the top-five finishers.

San Jose’s Randy Miller avenged a narrow loss in last Friday’s IMCA Sport Mod competition by winning the 15-lap main event this weekend. The opening lap of the race saw a red flag fly. Max Baggett spun across the field and was hit by Alex Wilson, who barrel rolled on the frontstretch before landing on his wheels. Wilson was uninjured.

Mike Kofnovec, Jr. of Gilroy assumed the lead on the restart before he spun on lap three to give up the top spot. The spin gave seventh starting Miller possession of the lead which he never relinquished, outlasting a late challenge from KC Keller of Tracy. Adriane Frost won a race long battle with Kelly Campanile for third with points leader Gavin Espino finishing fifth.

2020 West Coast Stock Car Hall of Fame inductee Jim Pettit II grabbed the IMCA Modified 20-lap feature. The leaders went three-wide on the start before Todd Hermosillo slowed in turn two. He was able to get going and the race stayed green. Stephen Hopf of Gilroy took the opening lap before Pettit drove past him on the outside to lead lap two. Kyle Bryan spun in turn four for a caution with three laps remaining. Anthony Copeland of Hollister used the caution to advance up to second position on the restart. Pettit led Copeland, Robert Marsh, JC Elrod, and Hopf at the finish.

Four Banger points leader Ryan McClelland of Scotts Valley led all 20-laps for his third feature win of the season. Watsonville’s Richard Mitchell ran second until lap eight when he fell out of the competition. 2019 champion Kate Beardsley won a race long battle for the second position ahead of Tony Gullo, 2019 Police-N-Pursuit champion Roy Iller, and Nicole Beardsley.