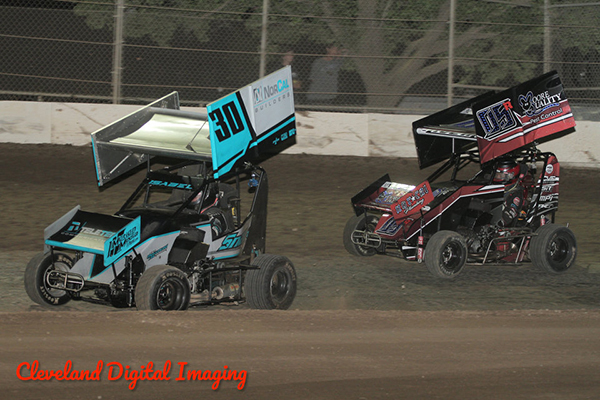 STOCKTON, CALIFORNIA (July 21, 2020) – Delta Speedway presented by Financial Center Credit Union will again race without spectators but with championship points on the line, with the fourth Micro Sprint points race of the year on Saturday night. Super 600, Non-Wing Restricted, and Jr. Sprints will continue their chase for the $1000 track championships on the 1/7th mile dirt oval.

The speedway located at the San Joaquin County Fairgrounds will again be closed to spectators with COVID-19 guidelines in affect. All attendees must be attending with a race team, with each team limited to ten people per car. A COVID waiver is mandatory for everyone who enters the facility. More information can be found at www.DeltaSpeedwayStockton.com

2019 Super 600 champion Caden Sarale has used a trio of top-five finishes to lead the series standings. Sarale enjoys a 16-point advantage over Raio Salmon with 2014 champion Travis Labat just one point behind in third. Both Salmon and Labat have also been the model of consistency with a perfect three-for-three top-five finishes. Salmon has podiumed in the championship in each of the last two seasons and is aiming for the top step in 2020. Sanders and Mitchel Moles round out the top-five in the current standings. Super 600 will compete for 30 laps on Saturday night.

Sarale also leads the Non-Wing points in his bid to repeat that championship as well. He picked up his first win of the season in the last event, while Mitchel Moles ranks second after sweeping the season-opening Summer Sizzler. Brandon Shaw finished second on July 11th and has advanced to third in the standings with 2018 champion Tj Smith and Denver, NC’s Brent Crews rounding out the top-five. Non-Wing will also race for 30 laps and a guaranteed $500 like Super 600.

Mattix Salmon enjoys a slim one-point lead in the Restricted points battle, leading Tracy’s Brandon Riveira. Salmon has a pair of third place finishes while Riveira has a best finish of second this year. Isabel Barnes is just nine points out of the lead after her debut win ahead of Reilee Phillips and Colin Kerby in fifth in the standings. Saturday’s Restricted main event will be 25 laps for a guaranteed $300 to win.

Lucas Mauldin looks to repeat his 2019 Jr. Sprint title but must first fend off a resurgence from second-year driver Hayden Stepps. Mauldin has won twice while Stepps won her first feature during the Summer Sizzler. Mauldin leads Stepps by five markers with Brody Rubio only 17 points out of first place. 2019 runner-up Kyle Fernandez current sits in fourth with Kellan Harper in fifth. The youngest drivers at Delta Speedway will battle for a guaranteed $200 to win and 20 laps on Saturday night.

Pit gates open at noon with the driver’s meeting at 4:30 pm and hot laps to follow. Come hungry as Royce Farms will be serving up their legendary race track BBQ for this competitor-only event.