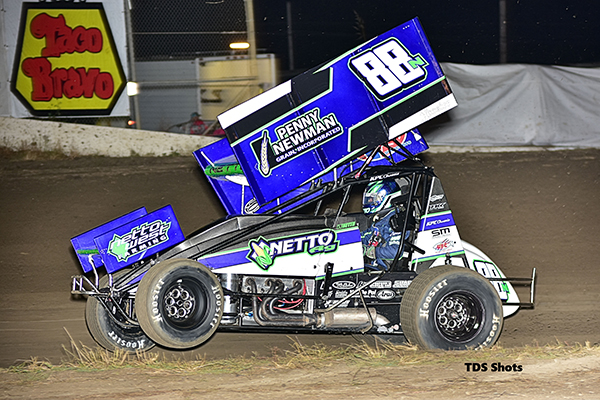 WATSONVILLE, Calif. (July 17, 2020) – Hanford’s DJ Netto became the fourth different winner of the 2020 Ocean Sprints presented by Taco Bravo, winning Friday’s opening night for the tenth Howard Kaeding Classic at Ocean Speedway in Watsonville. Netto – the 2019 King of the West champion – will now set his sights on night two with a $5,000 to win feature for the NARC KWS 410 Sprint Cars.

Two-time Ocean Sprints champion Shane Golobic won the $500 Martin Motorsports fast-time but drew a six inversion for the dash. Auburn’s Andy Forsberg won the dash to earn the pole for the feature. Mitchell Faccinto – winner of the season opener at Keller Auto Speedway in Hanford – took the lead from the outside pole position at the start of the 24-car, 30-lap feature.

Faccinto encountered lapped traffic by the seventh lap while Netto battled with Ocean opening winner Blake Carrick of Lincoln. Netto used a big run down the backstretch to go around Carrick on the outside, setting up Faccinto into turn three. Netto slid up in front of Faccinto to lead lap 13.

Fifth starting Golobic entered the picture when he took over third on lap 20. A caution flew on lap 24 for an incident involving Kurt Nelson and Tucker Worth in turn one. Golobic moved past Faccinto for second after the restart. On lap 27, Golobic tagged the wall in turn two and nearly surrendered the position but the caution flew to nullify the move.

The caution for an incident between Chase Johnson and Kaleb Montgomery set up a three-lap shootout for the win. Netto outran Golobic over the final three circuits for the Howard Kaeding Classic victory while Golobic achieved his second consecutive runner-up finish with Faccinto scoring third. July 10th winner Sean Becker of Roseville and Carrick rounded out the top-five.

A $500 Hard Charger for the weekend is being offered and 2015 champion Justin Sanders made his mark on night number one, charging from 20th to sixth at the finish.

“It means a lot to me. When I was starting racing and was a couple years into my career, (Kaedings) took me in and coached me for a little while. It’s really cool to win this race and it’s one I’ll never forget,” Netto said. “I didn’t know which 17 (car) it was (behind me). I didn’t know if it was Shane or if it was Justin. They’re all good here. I feel by the time we unloaded to the checkered flag we were pretty fast tonight.”

Fresno’s David Prickett scored his eighth Western Midget Racing win of his career, steering the #22q Spike/EcoTec to victory in the 20-lap contest.

Prickett followed Bower for several laps before taking the lead on lap seven. Watsonville’s Tyler Slay stopped on the backstretch after a spin, drawing the lone caution of the race on lap 11. Bower bicycled hard in turn one with three to go and was unable to challenge Prickett to the finish.

Central Point, OR’s Theron Smith won a lengthy battle for third ahead of Slay and Tyler Dolacki of Fresno in fifth.

Weir took the lead on lap five but then was collected by a spinning Pearce on lap 12 to surrender the lead. Peckham assumed the top spot, then fended off a resurgent Frost over a series of restarts for the win. Weir, Max Baggett, and points leader Gavin Espino rounded out the top-five.

Joe Gallaher won a Hobby Stock main event that featured four different leaders within the first eight laps. Gallaher led the final 13 laps for the victory. Bobby Huckaby, Jr. led the opening circuit before the driver from Santa Cruz spun to bring out the caution. Nicholas Johnson of Bakersfield took over the lead and led lap two, before he fell by the wayside with a flat right rear tire on lap six.

2019 Howard Kaeding Classic Hobby Stock winner Jerry Skelton assumed the lead but was passed on the outside by Gallaher on lap eight. 2019 Hobby Stock track champion Rob Gallaher battled with Skelton and Adriane Frost for second throughout the event. Frost would end up claiming a pair of second place finishes between Hobby Stock and Sport Mod, with Rob Gallaher third. Huckabay and Skelton finished fourth and fifth.

The Howard Kaeding Classic concludes Saturday night with the NARC King of the West Sprint Cars battling for $5,000 to win along with numerous other awards. The Hobby Stocks return for the second half of their doubleheader weekend while the IMCA Modifieds round out the race program. The grandstands will be closed to spectators, but a live stream is available via FloRacing.com or Speed Shift TV.