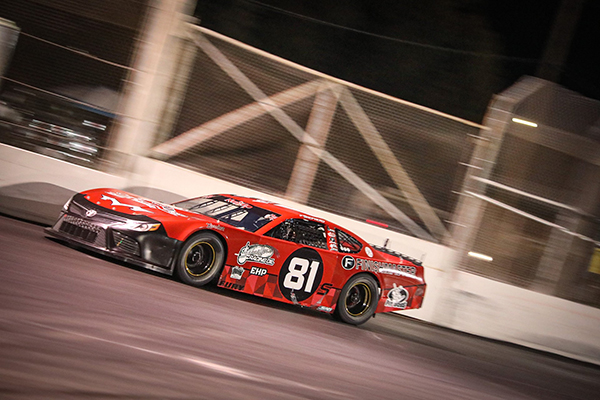 MADERA, CALIF. (July 11, 2020) – The drivers from the streets of Bakersfield continue to dominate the season at Madera Speedway, with Buddy Shepherd and Seth Wise repeating for their second 2020 wins in the MAVTV-televised Late Model competition at the one-third mile oval. Shepherd, the two-time Nut Up Pro Late Model champion, recovered from bouncing off the wall to win the 80-lap contest.

“From the last time to when he ran her two weeks ago, to today, Matt (Eshleman) has improved so much crew cheifing this thing. At the halfway it wasn’t too looking too good out there after getting into the wall,” Shepherd said. “This car is really good. I never thought I would be in a crate car. This season sure has been off to a strong start but we know it can go south really quick.”

Shepherd led time trials but it was four-time 2019 winner Jeremy Doss drawing the pole after the redraw. Loomis’ Michael Mitchell used a slide job to move past Blaine Rocha for second and brought Matt Erickson with him into third.

Shepherd started eighth and bounced off the backstretch wall but continued. The caution flew on lap 14 with John McCollum Jr. spinning in turn two. Doss restarted inside Mitchell, allowing Erickson to knife into second position.

Erickson used the outside line to sweep past Doss for the lead on lap 18. Shepherd advanced quickly back through the pack to take fifth on lap 33. Doss hounded Erickson, before an incident for the lead in turn one. The contact sent Erickson spinning and relegated Doss to the rear as well.

With 16 laps to go to the break, car no. 16 assumed the lead with Mitchell at the point. The lead was short lived as Shepherd clamped down. Shepherd took over the top spot on lap 39. He led the final 11 laps into the lap 50 break for adjustments and MAVTV interviews.

Coming out of the break, Dylan Zampa moved inside Mitchell but Mitchell was able to drive off the outside to maintain second. Doss moved forward to fifth position after the restart while Ryan Philpott and Mitchell battled for third. Mitchell ended up getting freight trained back to eighth in the closing laps but all the battling was far behind Buddy Shepherd. Shepherd won by 2.396 seconds over Dylan Zampa, Philpott, Doss, and Rocha.

Seth Wise outfoxed 17 of the best drivers ages 10-16 years old for his third consecutive 51FIFTY Jr. Late Model Series victory. Wise made the decisive pass on lap 53 for the win and remains the only active driver in the division with a victory.

The opening lap took several attempts to get into the books. Brody Armtrout and Cody Kiemele collided for a caution in turn three after a three-wide attempt. On the restart, red flags flew when Kasey Kleyn ended up parked on top of Cassidy Hinds in turn one. Both were able to return to the race, however. Wise took the lead and ran side-by-side with Arizona’s Bradley Erickson for several laps.

Their side-by-side battle resumed coming out of the lap 40 break for MAVTV interviews and adjustments before Wise edged ahead. Jadan Walbridge used the outside groove to get around Kercie Jung for third, then Walbridge approached Erickson for second. The caution waved on lap 50 for Armtrout going around in turn four. On the restart, Erickson used the outside to take over the top spot. Wise fought back, using a slingshot maneuver out of turn two to retake the lead. Wise topped Erickson, Walbridge, Jung, and Cole Brown as the top-five finishers.

Jeffery Erickson won his second consecutive Bandolero race and Rebecca Dubie won her second straight Mini Cup main event as well in the Mini Cup vs. Bandoleros competition. Nathaniel Edwards overcame a spin to finish second in the Bandos ahead of Trenton Eurto.

Madera Speedway’s MAVTV-televised racing continues July 25th with round #1 of the Race 2B Drug Free Big3 for $5,000 to win for the Nut Up Pro Late Models. 51FIFTY Jr. Late Models and Mini Cups vs. Bandoleros will also be competing.