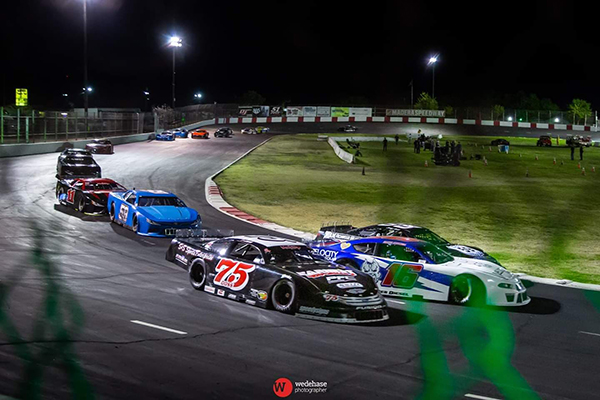 MADERA, CALIF. (June 23, 2020) – The 2020 championship battles in the MAVTV-televised Nut Up Pro Late Models and 51FIFTY Jr. Late Models begins on Saturday night at Madera Speedway, driving the one-third mile asphalt oval into the heart of its 48th season of racing. Mini Cups vs. Bandoleros will also join the action with their season opener as well. Nine races later on October 17th, championships will be decided in one of the nation’s premier track Late Model programs.

The grandstands will be closed but Madera’s production team will be presenting the action. All three main events will be televised for a later telecast on MAVTV and shown in a free live stream on the Madera Speedway YouTube Channel ShortTrackTV. Coverage begins at 6pm Pacific.

The Nut Up Pro Late Models compete for 80 laps with a 50-lap opening segment followed a 30-lap sprint to the finish. Last season’s title fight went down to the wire with four drivers – Austin Herzog, Dylan Zampa, Jason Aguirre, and Carlos Vieira – each eligible going into the final race. Herzog emerged with the top prize in a career-defining accomplishment for the 17 year-old, third-generation racer.

Both Aguirre and Vieira are not expected to challenge for the championship in 2020, but new and familiar faces look poised to challenge for the top spot. Madera’s all-time winningest Late Model driver Matt Erickson was locked out of victory lane in 2019 while two-time track champion Buddy Shepherd made an immediate impact in a partial schedule. Both are expected to be a threat on Saturday. Three-time MAVTV race winner Racin Vernon also comes into the weekend with a strong program behind him.

Perhaps the most notable additions to the Nut Up Pro Late Model field will come from the Jr. Late Models. 2019 champion Joey Iest from his hometown of Madera, CA advances into the championship fight in 2020 joined by third in points Jay Juleson as well.

On the Jr. Late Model side, the drivers ages 10-16 years old will be competing in a 70-lap feature on Saturday. The event is also split into two segments with a 40-lap start and a 30-lap finish. With Iest graduating from the series, a new champion will be crowned this year.

The competition level in this series continues to rise year-after-year with a nearly 20 car per event average in 2019. The season ended in dramatic fashion with Seth Wise earning his first career victory in a near photo finish against Iest. This year’s season opener is expected to continue that momentum for Wise and the rest of the young field.

Graduates from the Jr. Late Model Series have included Hailie Deegan, Austin Herzog, Jesse Love, and Ryan Vargas. Saturday’s race will begin writing the next chapter for these up-and-coming young drivers. Returning to the series in search of their first win include Jadan Walbridge, Kercie Jung, and Robbie Kennealy – drivers who were featured recently in the MAVTV “The Underdogs” TV Special.

Also racing this weekend are the Mini Cups vs. Bandoleros for the youngest drivers at Madera Speedway. 2019 Mini Cup champion Joey Kennealy will advance into the Bandoleros for the race-within-a-race format while his sister Harley will be one to watch on the Mini Cup side along with several new younger siblings of their Jr. Late Model counterparts. A 30-lap main event is scheduled for this division.

Activities get underway on Friday with practice. Pit gates open at 1pm with the track open from 5pm to 8pm.

On Saturday, pit gates open at 11am with practice beginning at 1pm. Qualifying will be at 2:30pm with the Mini Cup and Bandolero heat races and a possible Nut Up Pro Late Model B Main to follow. Main events will begin at 6pm.