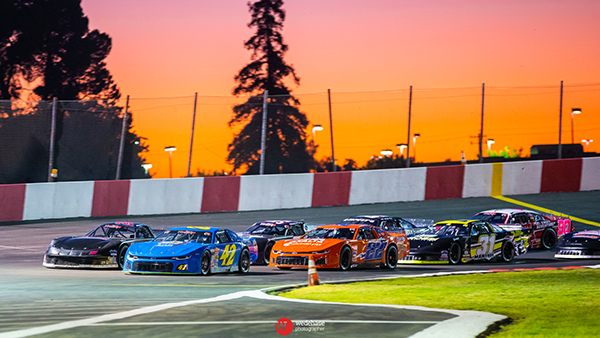 MADERA, CALIFORNIA (March 10, 2020) –The richest season of stock car racing at Madera Speedway begins this Saturday night with the $5,000 to win Nut Up Pro Late Model 100 at the one-third mile speedway. The event also kicks off the RACE 2B DRUG FREE BIG3 Series, televised on MAVTV. A large field of 51FIFTY Jr. Late Models and Mini Cups vs. Bandoleros will be in action as well, joined by Modified Super Toyotas on the undercard.

Drivers from across North America will flock to the Madera Speedway for the nine race Nut Up Series with the BIG3 series within. All told, more than $150,000 is on the line for the 49th season at the Madera Fairgrounds. The $5,000 to win Summer Speedfest on July 25 and the $10,000 to win Nut Up Short Track Shootout on October 3 round out the Big3 events.

“I’m looking forward to it a lot. Pretty excited to get back in the car. There’s always been a lot of competition here at Madera. It’s going to take a lot of hard work and dedication to hopefully repeat for the championship,” Austin Herzog said. “Race fans can expect a really action-packed race.”

Taking on Madera’s best are some of the best in the west including 2019’s standout driver Jeremy Doss of Upper Lake. Doss set the track record in the season finale at the Short Track Shootout before winning the feature. All told, Doss’ five starts netted four wins, four fast-times, and nearly 300 laps led. He went on to be the 2019 Kulwicki Driver Development Program champion as well. Drivers from Northern California, Southern California, Washington, Nevada, and Arizona are also expected on hand this weekend. The 100-lap race will be split over a pair of 50 lap segments, with a break on the frontstretch for adjustments and MAVTV interviews.

The 51FIFTY Jr. Late Model Series consistently delivers new drivers hoping to add their names to the illustrious alumni of the series. In just four seasons, the series for drivers ages 10-16 years old has already birthed competitors in the XFINITY and ARCA levels of the sport. The winner of last year’s finale, 15 year-old Seth Wise of Bakersfield, has a large target on his back heading into the 70-lap race this weekend.

New faces for 2020 include a pair from Colorado with Bandolero graduate Brody Moore and Pro Truck competitor Cassidy Hinds. This large field of talented youth will compete across two segments with a 40-lap run followed by a 30-lap dash to the checkered flag.

A bevy of new drivers will be in action when the youngest drivers at Madera hit the track in a 20-lap race for the Mini Cups vs. Bandoleros. These drivers will be taking their first steps on their Madera racing journey with champions from quarter midgets and Mini Dwarf racing among the crop.

Modified Super Toyotas looks to be another family feud between brothers Shaun and Ryan Reynolds in 2020. Their season opener will be a 20-lap contest as well.

Madera Racing on MAVTV airs Thursdays every week. The show airs at 5 p.m. and 8 p.m. PST and is also available on the Lucas Oil Racing TV app. The Donnie Large, Sr. tribute race with Super Modifieds vs. Sprint Cars airs on March 19th!