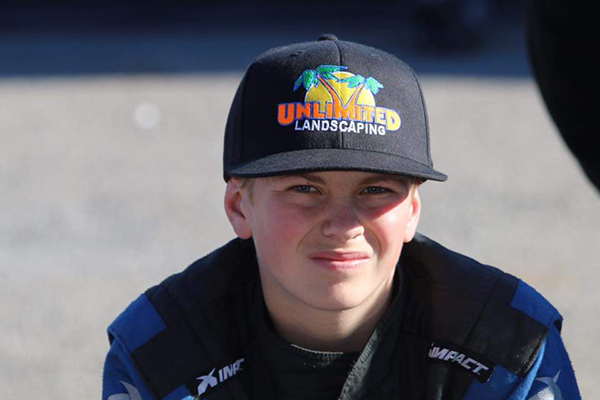 RIVERSIDE, CALIFORNIA (March 6, 2020) – 13 year-old Cody Kiemele and Toyota of Redlands have partnered for an ambitious 2020 campaign in Pro Late Model and Jr. Late Model competition. The three-time Jr. Late Model winner and two-time INEX Bandolero champion will race for the 2020 51FIFTY Jr. Late Model championship at Madera Speedway, televised on MAVTV. His season kicks off on March 14th for the first of nine races in the series.

The 70-lap contest next Saturday comes one year after Kiemele led laps in the 2019 season opener. Kiemele looks to build on that experience heading into this season’s competition. His resume was bolstered last June, when he finished fourth in the Pro Late Model feature at Orange Show Speedway on his 13th birthday. With that performance in mind, Kiemele is planning appearances at Irwindale Speedway, Orange Show, and the Bullring at Las Vegas Motor Speedway with the Pro division.

Toyota of Redlands is a 15-time Presidents Award winner, matching their product quality with fine service. They emphasize the entire ownership experience for the life of the vehicle with state-of-the-art facilities and customer sales and service satisfaction. Toyota of Redlands can be found online at: https://www.toyotaofredlands.com/

Jr. Late Model racing began in 2016 at Madera Speedway. It has served as the launching pad for careers such as ARCA drivers Hailie Deegan and Jesse Love and XFINITY driver Ryan Vargas. Six-time series winner Austin Herzog went on to win the 2019 Pro Late Model championship at Madera Speedway. Kiemele aims to follow in their footsteps by achieving success in the series for ages 10-16 years old, while also looking towards the future in the Pro Late Model division.

Next weekend’s action gets underway on Friday night with open practice from 5:30pm-8:pm. Saturday’s action incudes two practice sessions, time trials, and the 70-lap main event. The race is spread across two segments with a 40-lap opening segment followed by a break for adjustments. A 30-lap run to the finish determines the winner.

Race fans can keep up on Cody Kiemele Racing on Facebook with a direct link from www.CodyKiemeleRacing.com