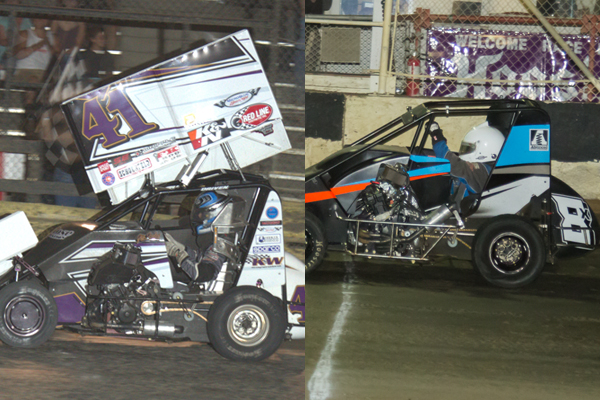 STOCKTON, CALIFORNIA (March 22, 2020) – With the sixth annual Hoosier Tire California Speedweek fast approaching, we are looking back at the last five years of excitement. Today we review the 2016 season of the Speedweek!

After Oklahoma’s Frank Flud was denied championship glory in 2015, Chris Andrews tried his hand to represent the sooner state and compete for his share of the wooden bear trophies. Andrews had one of the most dominating efforts in series history, winning the first three features in the Non-Wing division. His victories at Dixon, Delta, and Plaza Park gave him a nearly insurmountable lead heading into the final at Lemoore Raceway. A seventh-place finish sealed the deal for his championship-winning year. Surprisingly the Dixon Non-Wing podium featured no California drivers, with Andrews leading Arizona’s Colton Hardy and Oklahoma’s Josh Marcham across the stripe.

Andrews factored into the Super 600 championship as well, scoring an opening night win for a sweep of the features at Dixon. From there, young Gio Scelzi turned the Super 600 world on its ear. Scelzi finished in the top-two in all four features including two victories, holding off Andrews for the championship by 62 points. Andrews won $10,200 for his efforts across the two divisions, while Scelzi’s Super 600 week paid a healthy $6,150.

Restricted was yet another slobber knocker all week long. Joey Ancona topped Caden Sarale and Nikko Panella at Dixon. Those three went on to battle tooth and nail throughout the event. Sarale topped Ancona at Delta, while Panella led Ancona at Plaza Park. Ancona was poised for a championship but tangled with Sarale at Lemoore, allowing Panella to use a third-place finish to earn the championship. Colby Thornhill leapt past Sarale in the final standings with his win at the finale as well. Panella earned a cool $3,450 for his Restricted championship.