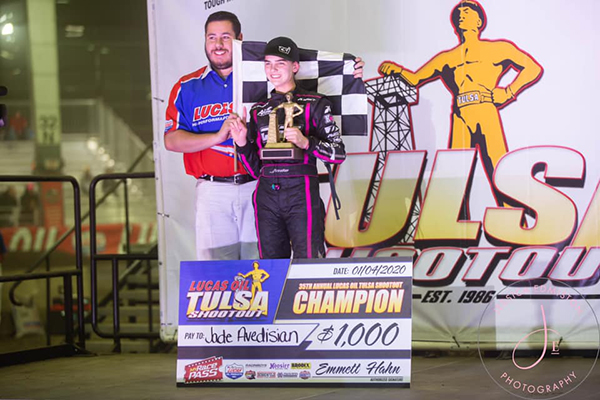 CLOVIS, CALIFORNIA (January 8, 2020) – 13 year-old Jade Avedisian of Clovis, CA made history as only the third female racer to win the prestigious Tulsa Shootout, steering her Driven Chassis to victory lane on Saturday night in the 35th running of the nation’s top Micro Sprint event.

Avedisian’s week got off to a flying start in the heat races on New Year’s Day inside the River Spirit Expo Center. Avedisian charged from eighth starting position to second, nearly earning maximum points for her effort. She advanced into the second qualifier race on Thursday, advancing from fourth to second to lock into the 20-lap feature on Saturday.

A methodical approach to the main event saw Avedisian running within the top three most of the event. Like her major event victories in 2019 such as her win during California Speedweek at Delta, Avedisian capitalized at the opportune time. She stormed into the top spot with five laps to go in lapped traffic, driving to a .566 second victory to become just the third female victor in Tulsa Shootout history.

The victory adds to the young driver’s 11 checkered flags in 2019 across every major Restricted event in the western United States. The Avedisian name will no longer be just a regional sensation but instead has put the national Micro Sprint scene on notice.

Jade’s 2020 season will begin outside of the Golden State. Avedisian will travel to Arizona and also compete in the first three rounds of the NOW600 National Micro Sprints in Texas and Oklahoma.