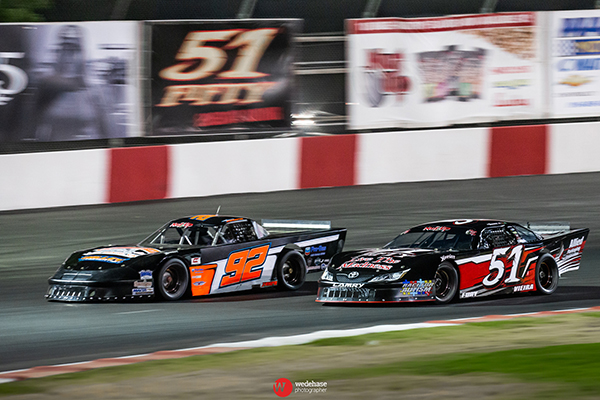 MADERA, CALIFORNIA (November 25, 2019) – The Carlos Vieira Foundation and their Race 2B Drug Free Campaign have joined forces with the Madera Speedway to support the MAVTV-televised Nut Up Pro Late Model Series. An additional $75,000 will be up for grabs during the Race 2B Drug Free BIG 3 on March 14, July 25, and October 3.

A $10,000 bonus has been offered if any driver can sweep all three races. A $10,000 “Triple Main Challenge” will be offered for the fast-time qualifier. If that driver can win the C Main, B Main, and feature all from the rear of the field they will win the bonus. An additional $5,000 bonus will be awarded if a driver can sweep all three fast-time awards. $5,000 bonuses have also been posted for finishing in the top-three in all three races, leading the most laps in all three BIG 3 races, and a bonus for winning all three B Mains.

“I love the sport of racing and I believe that this sport is a great way to help in deterring some kids and adults from going down the wrong path in their life. Through our foundation and our Race 2B Drug Free Campaign, we are continually supporting ways to help kids stay away from drugs,” Carlos Vieira said.

The Race 2B Drug Free sponsors motivational speakers to visit schools, speaking first-hand about the consequences associated with experimenting with drugs. The foundation also helps by providing a safe place for kids to go after school. Carlos Vieira Foundation sponsors a free, afterschool boxing and Jujitsu program where kids can positively release aggression and self-threatening behavior. They help youth replace it with learning discipline, camaraderie, and self-wellness.

“By sponsoring the BIG 3 Race Series, we are hoping to support a successful event in which kids and adults can look forward to the sport of racing, which is thrilling and exhilarating but does not involve being out in the streets and getting in trouble,” Vieira said.

“We are passionate about youth in our community and partnering with the Carlos Vieira Foundation to gain more awareness for the Race 2B Drug Free campaign is a great way to bring more people to the Madera Speedway that would otherwise not gain exposure to our sport,” Promoter Kenny Shepherd said. “I also see this as a great opportunity for us to use the platform we have with the speedway and our MAVTV show to raise awareness for the campaign. We came up with the three-race series that will create record amounts of prize money available for the drivers while at the same time promoting a great cause.”

Madera Racing on MAVTV airs Thursdays every week. The show airs at 5 p.m. and 8 p.m. PST and is also available on the Lucas Oil Racing TV app. The seventh round of the 2019 51FIFTY Jr. Late Model Series airs on December 5th!