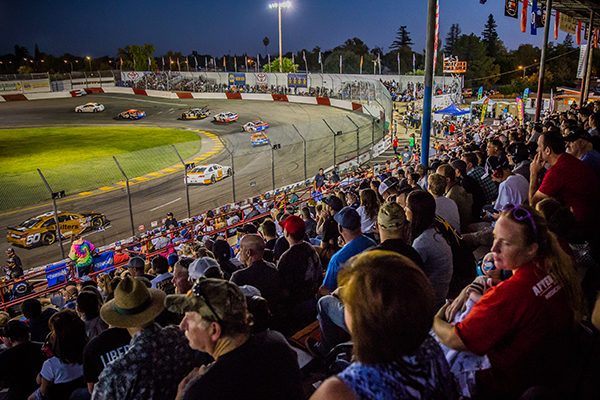 ROSEVILLE, Calif. (October 8, 2019) – Saturday night’s NAPA AUTO PARTS / ENEOS 150 will feature one of the largest racing events in the region, as the NASCAR K&N Pro Series, West roars into Roseville’s All American Speedway. Drivers from across the west will compete in side-by-side short track racing during the only national televised racing event in Placer County.

“The idea we get to race here and support some amazing organizations in the community I love is very special and I don’t take that for granted ever,” Promoter Bill McAnally said. “I love sharing my passion for motorsports with my friends and family and it’s incredible we get to bring this big event to Roseville.”

Joining the NAPA AUTO PARTS / ENEOS 150 will be the championship finales for the NASCAR-sanctioned Late Models, Modifieds, Super Stocks, and F4s, plus racing for Jr. Late Models, Mini Cups vs. Bandoleros, and Legends of the Pacific. All told, eight main events and over 350 laps of competition are scheduled for over $100,000 in cash and prizes.

The NASCAR K&N Pro Series, West is the highest developmental level of NASCAR on the West Coast and has been competing since 1954. Some of NASCAR’s top drivers, including Cup Series champions Kevin Harvick and Joey Logano, started their racing careers in the K&N Series. Elk Grove’s Kyle Larson and Grass Valley’s Matt DiBenedetto are among the Northern California-based racers who were propelled up the ladder thanks in large part to the series.

Saturday’s entry list includes a trio of female drivers with Hailie Deegan of Temecula, Calif., Brittney Zamora of Kennewick, Wash., and Australian-born Bridget Burgess of Tooele, Utah scheduled to compete. Deegan, age 18, ranks third in the championship standings. She is the only female driver to win in the K&N Series with three career victories.

The NAPA AUTO PARTS / ENEOS 150 will mark the 12th round in the 14-race championship for 2019. Kraus knows this one means just a little more — especially in the championship hunt.

“This is such a big race and we always want to perform our best,” Kraus said. “It’s the home turf for (car owner) Bill McAnally and this event always gets a huge crowd and we aim for the best results possible, that’s for sure.

“It’s so cool to see Bill’s face when his hometown crowd comes out to support this race and the stands are packed with high-energy fans with big smiles on their faces.”

Auburn’s Derrick Doering will make his debut in the series driving a car prepared by Roseville-based Bill McAnally Racing. Doering won the ride as one of the full-time competitors in the track’s Modified division. He was randomly selected in Sept. out of a pool of a dozen eligible drivers.

Also in action will be the track championships as part of the NASCAR Home Tracks program. Cameron Park’s Jason Romero has clinched the Late Model title, while battles continue in the other divisions. Points leaders include Loomis’ Nick Lyons in the Modifieds, Carmichael’s Andrew Peeler in the Super Stocks, and Roseville’s Ray Molina in F4s.

Mini Cups vs. Bandoleros are in a dead heat between Fort Bragg’s Trey Daniels and Loomis’ Kenna Mitchell. Smartsville’s Brody Armtrout leads the Jr. Late Model competition. The Legends of the Pacific touring series makes their second stop of the season after Nick Halen scored the win in August.