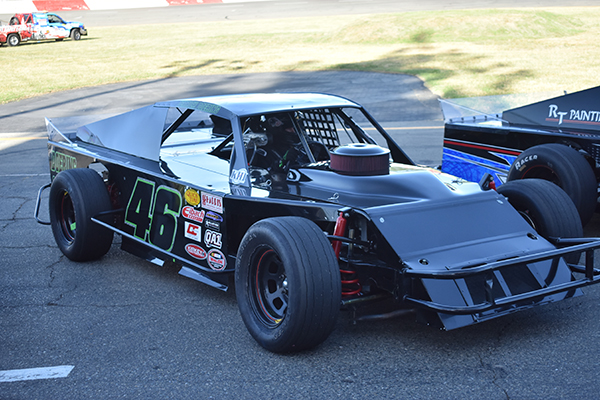 ROSEVILLE, Calif. (October 4, 2019) – Derrick Doering of Auburn, Calif. has received the outstanding opportunity to test and race in the prestigious NAPA AUTO PARTS / ENEOS 150, on Oct. 12 at his home race track the All American Speedway in Roseville. He will drive a Toyota prepared by Bill McAnally Racing.

Doering races the No. 46 NASCAR Limited Modified at the one-third mile. He was one of a dozen drivers eligible from the Late Model and Modified divisions, by virtue of competing full-time at the track. Doering won the award during the driver’s meeting on Sept. 14, then went on to win his first main event of the season later that night in a 30-lap contest.

“Normally I race in the Limited Modified Series at All American Speedway,” he said. “We just got fitted in one of the (K&N) cars, see how I like it and how they like me, and run on the 12th.”

“What’s the same (about the Modified and the K&N car)? Nothing! They’re full blown race cars and the real thing. Impressive work. These cars are beautiful.”

The NASCAR K&N Pro Series, West effort is a stark contrast to his Modified campaign, where he is the only crew member who prepares the car on a weekly basis.

“At home (with the Modified) it’s just me and my girlfriend Danielle,” Doering said. “She puts up with a lot with me out there working on it. Fortunately, on race days I do have help that come out and do what they can. Hopefully we’ll continue to be successful and possibly run both the Modified and the K&N car this next race out there.”

The NAPA AUTO PARTS / ENEOS 150 is the biggest race of the year at the speedway, with a large fan turnout expected and the only nationally televised race in the region on NBCSN. Over $100,000 in cash and prizes are awarded during the event. Doering – like many of the drivers at the speedway – knows the importance of the event and the excitement level it brings to Roseville.

Over 350 laps of racing are on the schedule, including the championship races for all six local All American Speedway NASCAR Home Tracks divisions. The NAPA AUTO PARTS / ENEOS 150 and Legends of the Pacific will bring the total to eight main events in a busy night at the speedway located @the Grounds in Roseville.

Posted in All American Speedway and tagged video, Work
← CHAMPIONS FOR THE 33RD SEASON OF DELTA SPEEDWAY TO BE CROWNED SATURDAYDOSS IS THE BOSS WITH $10,000 SHORT TRACK SHOOTOUT WIN AT MADERA →